Further information:
See more church activity in our Community News section; in that section, see the menu on the left for year-by-year news.
See links for some church resolutions and associated resources at our Divestment page

Please help us build this collection by submitting news and/or texts of resolutions and actions: [email protected].

Pointing to the rapidly deteriorating situation in Palestine/Israel, leaders of the Christian Church (Disciples of Christ) in the United States and Canada issued a Pastoral Letter Wednesday, writing, “Israeli policies and practices that discriminate against Palestinians— Christians and Muslims alike—are consistent with the international definition of the crime of apartheid.”

“The continuing occupation, denial of rights, and injustice that Palestinians endure is not consistent with our understanding of God’s vision for justice for all people, and therefore is sin,” the letter reads.
See the full letter
Download the pastoral letter
To accompany the pastoral letter, the Church also published answers to Frequently Asked Questions.  See the FAQs
See the report in Mondoweiss:
“Another North American Church Sees Apartheid in Israel

In January 2022, Episcopalians in the Diocese of Washington continued the momentum in their denomination by adopting three resolutions: Opposing Israel’s Apartheid (by 73%), Confronting Christian Zionism (by 76%), and Defending the Right to Boycott (by 80%).

by Steve France
2 February 2022
Episcopalians in the Diocese of Washington voted big against Israel’s treatment of Palestinians on 29 January, adopting resolutions to “oppose Israel’s apartheid” (by 73%), to “confront Christian Zionism” (by 76%), and to “defend the right to boycott” (by 80%), which is under assault from anti-BDS laws enacted in dozens of states and championed in Congress.

The latest church action followed similar emphatic statements by Episcopalians in the
Dioceses of Chicago, Rochester, Vermont, and Olympia, all aimed at the denomination’s
General Convention in Baltimore in July.
See the report at the EPF PIN Website

The resolutions adopted by the Diocese of Washington:
Confronting Christian Zionism
Opposing Israel’s Apartheid
Defending the Right to Boycott

In the fall of 2021, Episcopalians in three dioceses [regional bodies of the Episcopal Church] – Olympia, Vermont and Chicago – adopted strong resolutions in support of Palestinian human rights and condemning Israeli violations of international law and established human rights conventions.

The October convention of the Diocese of Olympia passed two resolutions. The first of these resolved to educate congregations in the diocese “about Israel’s ongoing military occupation of the West Bank and blockade of Gaza and Israel’s separate, inequitable laws and unequal treatment of Palestinians” and further identified the Bishop’s Committee for Justice and Peace in the Holy Land as a resource for this work.

Their second resolution, which will be forwarded to the 2022 General Convention of the Episcopal Church, condemned “the continued occupation, segregation, and oppression of the Palestinian people” and resolved that “the Convention urge the President of the United States and the US Congress to take action to oppose Israeli laws and practices that result in unequal rights for two peoples.”

In early November, the Diocese of Vermont expanded upon its rich history of Palestine advocacy by passing three resolutions. Two of these, “Application of the Leahy Law to Israel” and “Supporting Freedom of Speech and the Right to Boycott,” were passed at Vermont’s 2018 diocesan convention. This year’s convention voted to send these resolutions on to the Episcopal Church’s General Convention. Vermont’s Right to Boycott resolution has served as a model for at least two other dioceses, Chicago and Rochester, which have passed similar resolutions.

The third of the Vermont resolutions, “Recognition of Apartheid in Israel/Palestine,” was a landmark achievement, marking the first time that any entity within the Episcopal Church had named Israeli policy toward Palestinians apartheid. That this resolution passed with a strong majority is a measure of a shifting discourse and increased appreciation of the nature of the Zionist occupation of Palestine.

On November 20th, at the Diocese of Chicago’s Convention, delegates adopted Resolution F184 “Confronting Apartheid“….The diocesan website presents the official text and explanation, with the resolution amended (the final “resolved”) from the floor.

Two “C” resolutions passed at the 2020 diocesan convention have already been forwarded for consideration at 2022 General Convention: Supporting the Right to Boycott and Confronting Christian Zionism.See the EPF PIN Newsletter, Nov. 2021.

This action by the UCC set a new standard for the church movement for Palestinian rights. By speaking the truth of Israel’s actions without qualification and declaring without reservation the duty of the church to respond accordingly, the denomination has challenged not only its own members but churches in the United States and the world at large to do the same. In response to this groundbreaking document, defenders of Israel’s crimes could only sputter in protest, hauling out tired arguments because they have nothing more to say in the face of the churches inevitable, unstoppable stand for justice.

The UCC Declaration adopts the premises, theological principles, and action imperatives of the 2020 “Cry for Hope” of Kairos Palestine and Global Kairos for Justice. It removes, once and for all, any distance between the cry of an oppressed, dispossessed people and the commitment of a Christian denomination to respond to that cry. It directs members of the UCC and its congregations and its bodies at all levels to challenge the ways in which the Bible or tenets of the Christian faith are used to promote or justify oppression, dispossession or racial supremacy in study, liturgy or preaching.

See the full text of the resolution, the letter from Kairos Palestine, study resources for this resolution created by UCC PIN and more, on Palestine Portal.

On June 26, 2020 delegates to the virtually held General Assembly of the Unitarian Universalist Association (UUA) voted to adopt the Business Resolution “Embodying Human Rights in Our Investment Decisions”. The vote in support of the resolution was overwhelming with 95% of the delegates voting for adoption.

Actions mandated in this church legislation include: “To cease purchasing shares in corporations that are consistently, knowingly, and directly complicit in egregious human rights violations and violations of international law, and to divest from shares directly held in such corporations” Curtis Bell, President of Unitarian Universalists for Justice in the Middle East said: “UUJME is pleased that the ‘Whereas’ statements of the resolution place the human rights of Palestinians squarely among the human rights that all human beings share – Black people, people of color, Indigenous people, LGBTQI people, disabled people, Uighurs, prisoners, refugees, religious minorities and others.”
Learn more about this resolution:
https://uujme.org/press-release-uua-2020-general-assembly-adopts-business-resolution-on-investing-in-accord-with-human-rights-with-95-vote/
See the text of the resolution:
https://www.uua.org/sites/live-new.uua.org/files/2020_ga_business_w_amendments.pdf

(Excerpts from report by Peace Not Walls of the ELCA)

On August 6, 2019, at the ELCA’s 2019 Churchwide Assembly in Milwaukee, the assembly approved by 96% (YES-829; NO-33) four Assembly Actions related to Israel and Palestine (the memorials were presented en bloc with other memorials).

The Assembly Actions deal with the human rights social investment screen, the detention of Palestinian children by Israel, funding for Augusta Victoria Hospital, and continuing to listen to various perspectives on the conflict. The Assembly Actions include urgent requests for advocacy related to the Lutheran World Federation’s Augusta Victoria Hospital and the military detention of Palestinian children by Israel. The Peace Not Walls team will continue to provide resources for education and advocacy related to both. 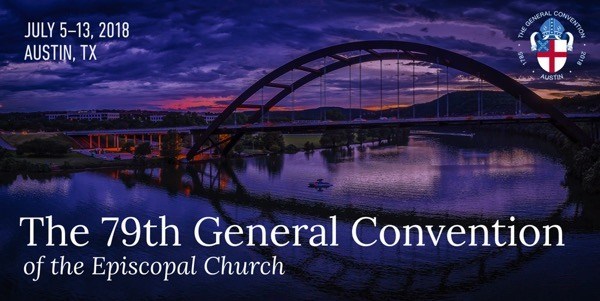 July 2018 – At General Convention 2018, the Episcopal Church adopts an investment screen that will bar companies involved in Israeli violations of Palestinian human rights
Resolution B016, “Adopt ELCA Action on Israel,”  calls for church to join with Evangelical Lutheran Church of America (ELCA) by directing the Committee on Corporate Social Responsibility (CCSR) to develop criteria for Israel/Palestine based on a human rights investment screen, together with past actions of General Convention and Executive Council. It also calls to increase positive investment in Palestine and encourages CCSR to engage in shareholder advocacy regarding human rights in Israel and the occupied territories.
See the USCPR report: https://uscpr.org/episcopaliandivestment/
See the resolution: https://www.vbinder.net/resolutions/B016?house=hd&lang=en  Original Version: https://www.vbinder.net/resolutions/B016/original_text?house=hd&lang=en

The Episcopal Church has also adopted the following excellent resolutions:
B003: On the Status of Jerusalem
Affirms Jerusalem as shared capital of State of Israel and future Palestinian State. Supports respect for civil rights & religious interests of Christians, Muslims & Jews. Calls for free & secure access to holy sites. opposes Trump’s move of the US embassy from Tel Aviv to Jerusalem. See it: https://www.vbinder.net/resolutions/B003?house=hd&lang=en  Original version: https://www.vbinder.net/resolutions/B003/original_text?house=hd&lang=en

C038: Safeguard the Rights of Palestinian Children
Seeks assurances from Israel and Palestinian Authority leaders that existing policies provide all rights & protections for children under18, adhering to Article 37 of the United Nations Convention on the Rights of the Child. See it: https://www.vbinder.net/resolutions/C038?house=hd&lang=en  Original version: https://www.vbinder.net/resolutions/C038/original_text?house=hd&lang=en

D018: Negotiating the Israeli Palestinian Conflict
Recognizes the right of Israelis & Palestinians to self-determination, full human & civil rights, with commitment to a negotiated settlement by both parties, in whatever agreed upon political form that may take. See it: https://www.vbinder.net/resolutions/D018?house=hd&lang=en  Original version: https://www.vbinder.net/resolutions/D018/original_text?house=hd&lang=en

D027: Pursuing Justice in Gaza
Calls for to U.S. to reinstate full funding for UNRWA to the 5 million Palestinian refugees in Gaza and camps around Middle East. Condemns the use of live fire by Israeli forces against unarmed civilians in Gaza and urges compliance with Leahy Amendment regarding U.S. military aid to Israel. See it: https://www.vbinder.net/resolutions/D027?house=hd&lang=en  Original version: https://www.vbinder.net/resolutions/D027/original_text?house=hd&lang=en

July 2017 – United Church of Christ votes to support Palestinian children in Israeli military detention
79% of delegates at the 31st General Synod of the UCC  voted for a resolution which calls on the State of Israel to guarantee basic due process rights and exercise an absolute prohibition against torture and ill-treatment of detained Palestinian children. Read the text of the resolution

July 2017 – Christian Church (Disciples of Christ) nearly unanimously adopts a resolution addressing the rights of Palestinian children and youth living under Israeli military occupation that matches the UCC resolution above.

July 2017 – Mennonite Church USA Votes Overwhelmingly For Israeli Occupation Investment Screen
Roughly 98% of delegates at Mennonite Church USA biennial convention adopt “Seeking Peace in Israel and Palestine” to create an investment screen for the purpose of “withdrawing investments from companies that are profiting from the occupation.”  Read the text of the resolution

May-June 2017 – United Methodists in U.S. Defend the Right to Boycott and Divest
23 Resolutions on Israel/Palestine in 15 regional church bodies also oppose the abuse of Palestinian children living under occupation, support the international HP Boycott, call for responsible travel in the Holy Land by church members including engagement with Palestinian Christians, encourage investment in new church fund that excludes key occupation-complicit companies, and more.  Read the press release
Read the text of resolutions

February 2017 – 15 Christian Denominations, Agencies and Organizations Send Briefing to Congress: “Toward Peace, Justice, and Equality in Israel and Palestine”
Briefing paper calls on U.S. policy makers to: urge Israel to end the occupation of Palestinian territories, apply the Leahy Law and other mechanisms to the proper use of U.S. foreign aid, protect human rights groups and defenders, urge both Israelis and Palestinians to refrain from violence, and protect the rights of American citizens engaging in BDS actions. Read the briefing paper 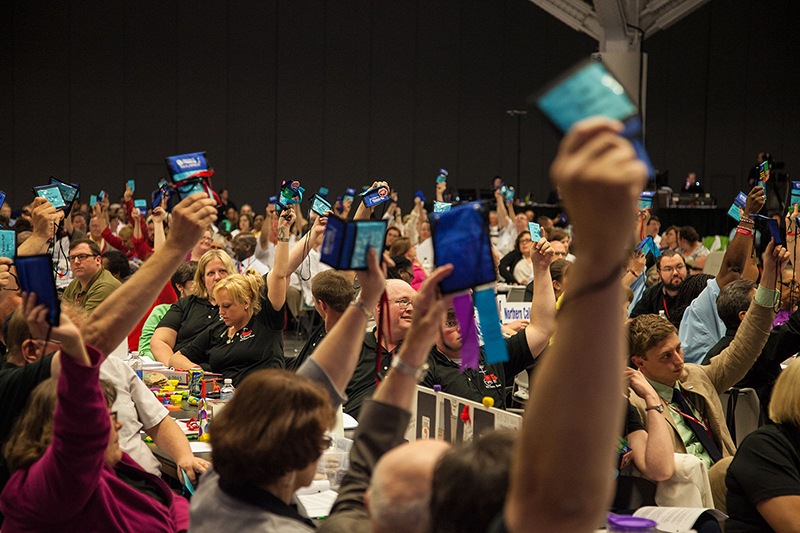 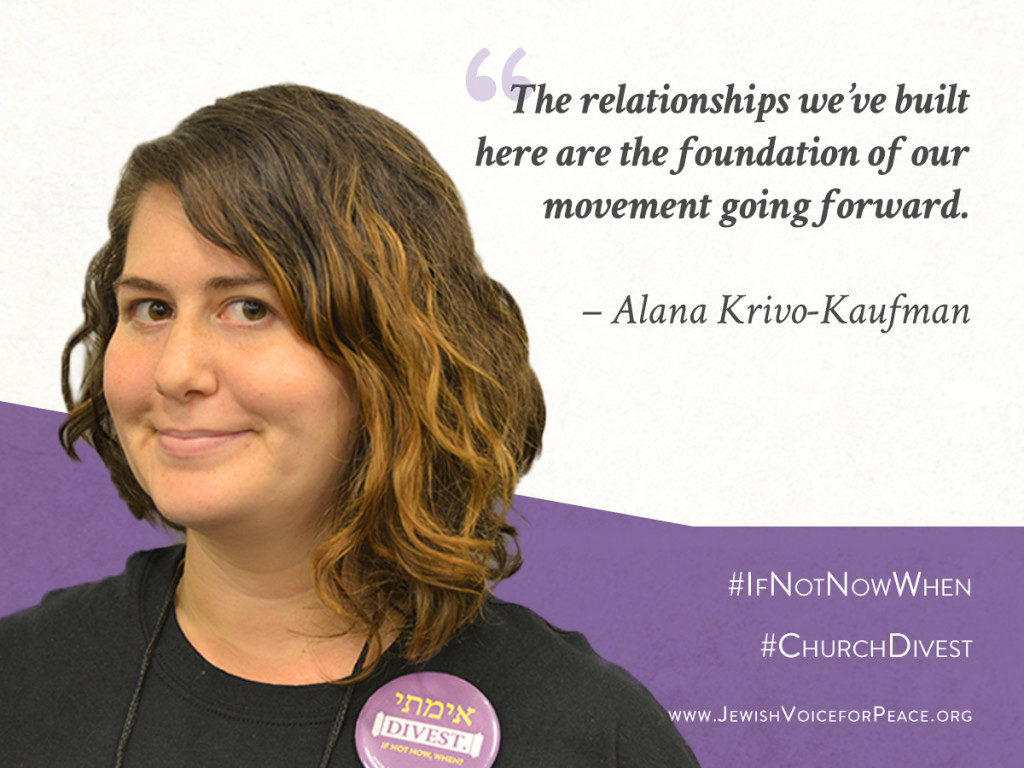 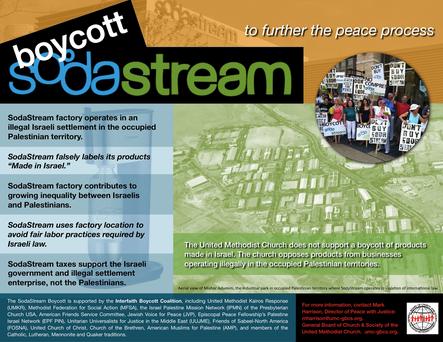 July 2013 –The Christian Church (Disciples of Christ) adopts a resolution “Encouraging a Fuller Experience of Israel-Palestine” which provides recommendations for church members who visit the Holy Land.  Read the text of the resolution 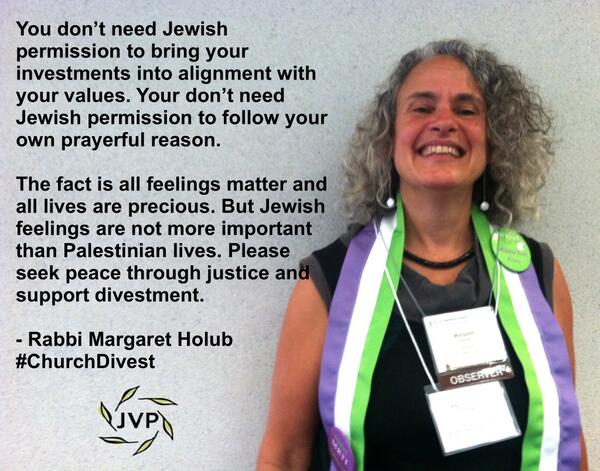 18 Victories spanning 2012 through 2015 – 18 Quaker Meetings Across 15 States Endorse Boycott, Divestment or Both
Breakthrough! Quakers Spanning 3 US States Call For Boycott & Divestment
https://bdsmovement.net/news/breakthrough-quakers-spanning-3-us-states-call-boycott-divestment
Download a compilation of decisions from many Quaker meetings
Download a list of meetings supporting boycott or divestment from the Israeli occupation

Summer 2005 – United Church of Christ General Synod calls for the use of Economic Leverage — including ending military aid and divestment — to promote peace in Middle East. 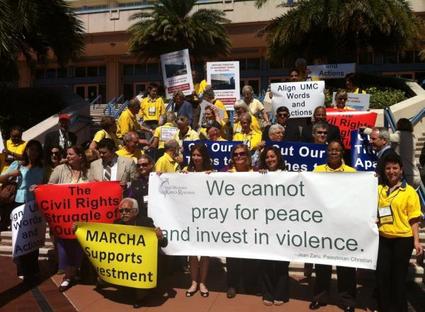 18 United Methodist Church Annual Conferences, representing thousands of churches and hundreds of thousands of members, adopt 30 resolutions and statements calling for divestment; several divest their own conference funds
https://www.kairosresponse.org/pr_acs_divestment_2015.html
and  https://www.kairosresponse.org/umkr_pr_ac_action2013.html
Find text of some of these resolutions at: https://www.umhltf.org/UMC_Annual_Conf_Resolutions.html