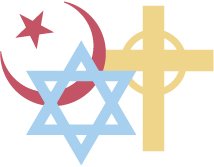 One source of distortion and confusion that has beset the issue of Israel and Palestine is how it is often cast as a “religious struggle.” Certainly, religious and theological issues play a key role, but seeing the situation as a religious conflict distracts from the primary issue of human rights and from understanding the Palestinian cause as an anti-colonial struggle.

This distortion has had profound implications for the movement for Palestinian liberation, as those who seek to defend Israel’s actions use arguments based on this premise. With respect to Islam, citing “Palestinian nationalism” as a factor in “rejecting Israel’s right to exist” is often code for “Muslims want to destroy Israel out of implacable hatred for the Jewish people.” Islamophobia is thus used by those who want to preserve Jewish hegemony in Palestine, and in the current global political climate, that message finds many sympathizers in the West.

With respect to Jewish-Christian relations, criticism of Israeli treatment of Palestinians often is equated with anti-Semitism. It then follows that the most constructive way to address those concerns is through Christian-Jewish “interfaith dialogue,” an activity that is closely linked to the long-term Christian program to reconcile with Jews for millennia of church persecution. In this way, Christians are permitted to consider the urgent issue of Palestinian human rights only within the severely restrictive context of Christian penitence for persecution of the Jews. This method has been used increasingly to silence criticism of Israeli policies by Christians.

Charges of anti-Semitism are also used all too frequently to label principled Jewish critics of Israel as “self-hating Jews,” a charge that should always be exposed for the dishonest and defamatory weapon it has become. Nevertheless, the very real matter of rising anti-Semitism in the United States and Europe – and the inevitable opportunities for that bigotry to manifest within the context of concurrently rising world attention to the plight of the Palestinian people – also must be squarely acknowledged and addressed, if the global movement for Palestinian rights is to maintain the moral authority of its inherent integrity.

In this section of the Portal, you will find further consideration of these three topics: