Much of the text and information below is derived from resources from American Muslims for Palestine (AMP) and Jewish Voice for Peace (JVP). See their resources listed on this page. However, some source text has been adapted. 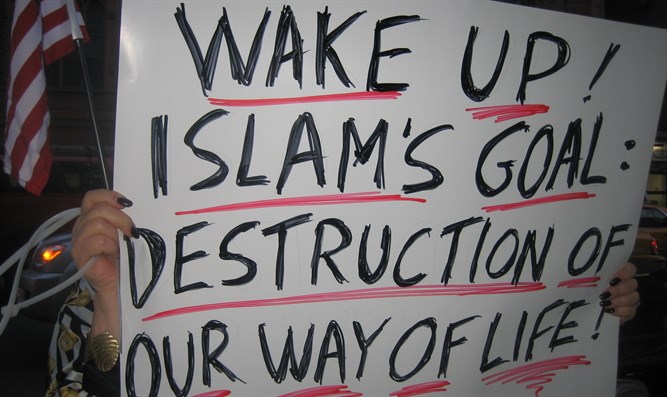 Hysteria about Muslims in American life has been on the rise in recent years. With it has gone an outburst of arson attacks on mosques, campaigns to stop their construction, and the branding of the Muslim-American community, overwhelmingly moderate, as a hotbed of potential terrorist recruits. Islamophobic campaigns are seen from rural Tennessee to New York City. In Oklahoma, voters overwhelmingly approved a ballot measure banning the implementation of Sharia law in American courts (not that such a prospect existed). This campaign of Islamophobia wounded President Obama politically, as one out of five Americans has bought into a sustained chorus of false rumors about his secret Muslim faith. And it may have tainted views of Muslims in general; an August 2010 Pew Research Center poll revealed that, among Americans, the favorability rating of Muslims had dropped by 11 points since 2005.

Erupting so many years after the September 11th trauma, this spasm of anti-Muslim bigotry might seem oddly timed and unexpectedly spontaneous. However, it is the fruit of an organized, long-term campaign by a confederation of activists who first focused on Islamophobia soon after the September 11th attacks, but only attained critical mass during the Obama era. 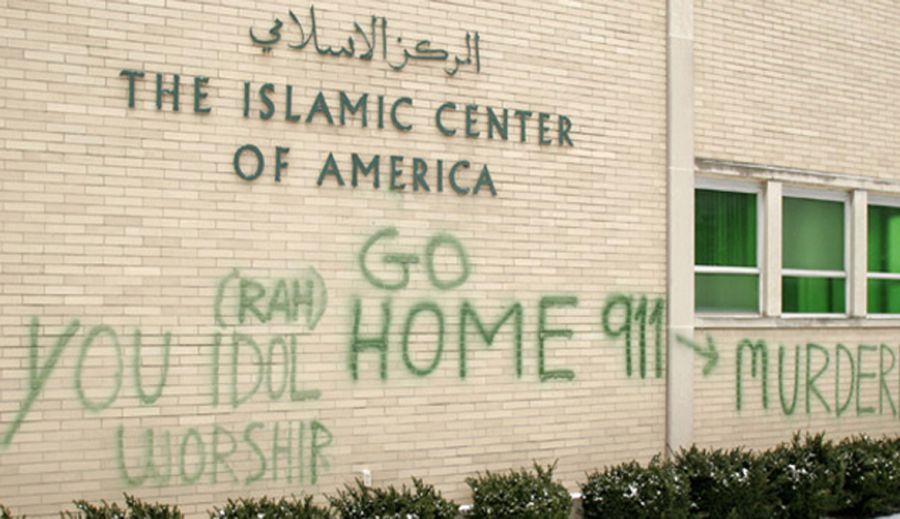 Long before 9/11, a group of pro-Israel advocates began sounding the alarm about the rise of ‘Islamists’ in the
United States. So-called “terror experts” like Daniel Pipes and Steven Emerson, for years have raised ‘dire warnings’ in the media about the growing population of Muslims in the United States. Emerson wrongly blamed the Oklahoma City bombing of 1995 on “Middle East terror,” on a national news broadcast. Others have warned of a the threat a “stealth jihad,” was poised to take over the country.

Today, more than a decade after the September 11 attacks, Islamophobic rhetoric has become more acceptable in mainstream discourse. Outside influencers have successfully divided Muslims into two camps — “good, moderate Muslims,” who remain silent on major issues impacting their community, and so-called ‘radicals.’ There’s been an increase in surveillance on Muslims, with federal agencies placing informants in mosques and stigmatizing mosque communities through the use of Countering Violent Extremism programs.

Against this backdrop, Muslims — especially Muslim leaders and organizations — have been struggling with how to engage in healthy interfaith dialogue that can promote understanding between peoples because of strategic efforts by Zionist organizations to co-opt these well meaning events. In other words, pro-Israel organizations have outlined strategies and tactics to engage Muslims in ‘interfaith cooperation’ in attempts to get them to focus solely on domestic issues and forgo Palestine all together. And when fear and confusion grew after the Trump won the 2016 presidential election, we suddenly saw Zionist organizations like the American Jewish Committee and the Anti- Defamation League, both staunchly anti-Arab and promoters of Islamophobia, reaching out to Muslims.

A specific form of Islamophobia – which American Muslims for Palestine (AMP) calls “Creeping Normalcy” – are the efforts to normalize Israel’s occupation of Palestine through illegitimate interfaith cooperation. AMP Is especially interested in the connection between Israel, Zionism and Islamophobia. It is important to understand the relationship between these issues in order to develop appropriate strategies in defining your interfaith work.

AMP maintains interfaith relationships and intersectional solidarity work are instrumental in the movement for justice in Palestine. We firmly support appropriate interfaith work, when it is based upon the common values of justice and international and American law. But we must identify pro-Israel, Zionist organizations, whose agenda is the unequivocal support of Israel. One way to do this is to use Islamophobia to attack and smear Muslims who do Palestine solidarity work.

Islamophobia, the U.S., and Israel

A) Islamophobia and Israel’s anti-Palestinian Politics
Pro-Israel advocates play a major role in advancing an Islamophobic narrative that helps deny justice and equal rights to Palestinians. Examples include:
– Contribution to the creation, operation, and funding of Islamophobic groups and campaigns and to the spread of anti-Muslim narratives in the U.S. ○ Development strategies, resources, and infrastructures that unconditionally support Israel
– Promotion of anti-Muslim attitudes in this country that contribute to hatred and fear of Palestinians and strong U.S. support for Israel
– Financial support of virulently anti-Muslim groups. A small group of funders has given these groups millions of dollars. 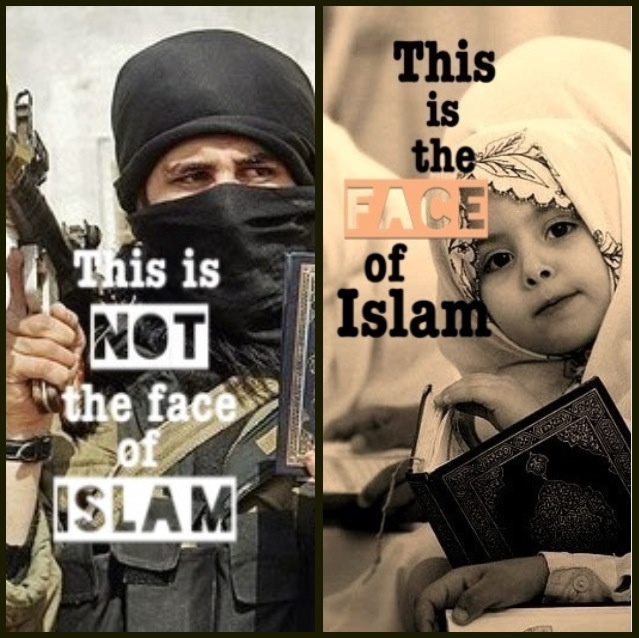 B) Islamophobia in the U.S. and the U.S. “War on Terror”
Islamophobic framing that is part of U.S. foreign policy and messaging:
– “Clash of civilizations,” a post-Cold War concept: Muslim religion and “culture” as the main enemy of the United States
– Palestinians (and other Arabs) = Muslims, and all Muslims = “terrorists,” “terrorist” sympathizers, or potential “terrorists”
– Israel as “Western Civilization’s” last line of defense from the “hordes” of Muslims who are supposedly bent on destroying it

C) The “Good Muslim/Bad Muslim” Paradigm and the Israel Litmus Test
Key cultural, social and political narrative that plays out in policy and beyond: The presumption that, until they can somehow “prove” they are “good,” all Muslims, Palestinians, Arabs, South Asians, and others who are often conflated with Muslims are “bad” (“terrorists,” violent extremists, a threat to Jews, plotters trying to take over the U.S. government)

The Qur’an
In Islam, the Qur’an is the word of God to the community, revealed through the prophet Muhammad (PBUH). You can read the Qur’an online: http://www.quranexplorer.com/quran/

PCUSA – Islam and Christianity, Leader’s Guide and Participant’s Book – 14 pp
Study Guide for group reading and discussion, exploring the differences in Christian and Muslim beliefs about Jesus, the Trinity, and other subjects.

United Church of Christ
Webpage: Countering Islamophobia: http://www.globalministries.org/mee_countering_islamophobia_index
PDF: Resolution – On Actions Of Hostility Against Islam – 3 pp.
PDF: Resolution – Relationship between the UCC and the Muslim Community – 2 pp,
PDF: What is Islam? A basic introduction – 4 pp.

The Bridge Initiative: http://bridge.georgetown.edu/
Based in Georgetown University’s Prince Alwaleed bin Talal Center for Muslim-Christian Understanding, The Bridge Initiative is a multi-year research project that connects the academic study of Islamophobia with the public square.

CAIR – Hate Hurts: https://hatehurts.net/
Harassment.  Bullying.  Targeting of religious institutions.  Violence. Bigotry is real, whether it targets the Muslim community, Sikhs and South Asians, or individuals from Middle Eastern and North African descent.  Our goal is to create a definitive online resource – updating you on this unprecedented wave of bigotry, and its jarring impact on our communities. This is a special project of CAIR-AZ, to help highlight the global impact of bigotry. Our goal is to raise awareness, provide in depth commentary and new content that will be used as an educational resource all over the world.

A Common Word:  http://www.acommonword.com/
A major international initiative by Muslims, inviting Christians into dialogue, focuses on the two common principles of Christianity and Islam—to love God and to love your neighbor. The invitation is called, A Common Word Between Us and You
PDF: Introduction
PDF: The Letter

Discover Islam Foundation: http://www.discoverislam.com
Discover Islam was originally founded as an interfaith project on a Canadian university campus in 1991. In 1995 Discover Islam was launched in the United States as an official media company. In the same year the first edition of Discover Islam Poster Series was produced. The poster series was extremely successful and the company slowly evolved into a full-fledged media company dedicated to producing high quality educational material about Islam and Muslims. In 1996, our three readers Discover Islam: The Reader; Jihad: Struggle for Peace; and The Muslim Woman readers were created. In 2005, our 2nd Edition Discover Islam Poster Exhibit Series was produced. Later in 2009 and 2010 Discover Islam produced its 6 award-winning films Islam: Faith & History, Islam: An American Faith, African Americans & Islam, Women & Islam, Islam: A Faith Hijacked, and Christians & Islam.

Fear, Inc. from Center for American Progress: https://islamophobianetwork.com
An in-depth investigation conducted by the Center for American Progress Action Fund reveals not a vast right-wing conspiracy behind the rise of Islamophobia in our nation but rather a small, tightly networked group of misinformation experts guiding an effort that reaches millions of Americans through effective advocates, media partners, and grassroots organizing. This spreading of hate and misinformation primarily starts with five key people and their organizations, which are sustained by funding from a clutch of key foundations.

Institute for Social Policy and Understanding (ISPU): http://www.ispu.org/public-policy/islamophobia
ISPU examines the impact of Islamophobia on the wider public and offers historical context as well as modern day best practices to meet this challenge. The year 2050 is when many experts project that America will become a nation without a specific ethnic or racial majority. While some welcome this growing diversity, others see it as a demographic threat and are working to broadly erode the rights of several historically marginalized and minority groups, including American Muslims. Seeking to offer solutions to the American Muslim community’s toughest challenges through sound research, ISPU launched Islamophobia: A Threat to All.

Muslim Girl: http://muslimgirl.com
We’re normalizing the word “Muslim” for both Muslims and non-Muslims alike. MuslimGirl.net was launched from the bedroom of a high school girl that was fed up with the misleading misconceptions surrounding Islam — the way the news coverage and media outlets kept skewing the image of Muslims into a nasty one; the mistrust, racism, and flat-out hatred that the inaccuracies flamed; the muting of young Muslim voices from mainstream society; and the resulting disillusionment that young Muslims suffer about their religion in the tornado of it all. We at MuslimGirl are taking back the narrative. We use our own voices to speak up for ourselves. We are raising the place of Muslim women in mainstream society. We are drawing awareness to the Qur’an’s message of gender equality and Islam’s principle of peace. We are paving the way towards a world in which every woman can raise her head without fear of being attacked for her gender or beliefs.

Shoulder To Shoulder Campaign: http://www.shouldertoshouldercampaign.org
Standing with American Muslims; Upholding American Values
Shoulder-to-Shoulder is an interfaith organization dedicated to ending anti-Muslim sentiment by strengthening the voice of freedom and peace. Founded in November 2010 by over 20 national religious groups, Shoulder-to-Shoulder works not only on a national level, but offers strategies and support to local and regional efforts to address anti-Muslim sentiment and seeks to spread the word abroad.

Fear Inc – Behind the $57 Million Network Fueling Islamophobia in the U.S. 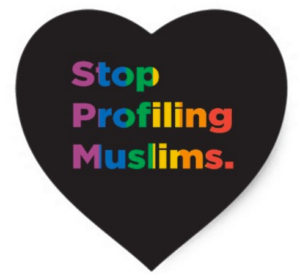 Poster: Standing with Muslims against Islamophobia and Racism 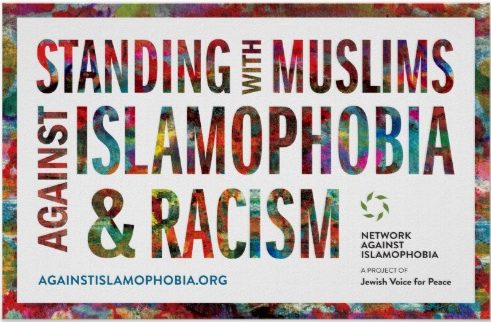 Lawn Sign: Standing with Muslims against Islamophobia and Racism 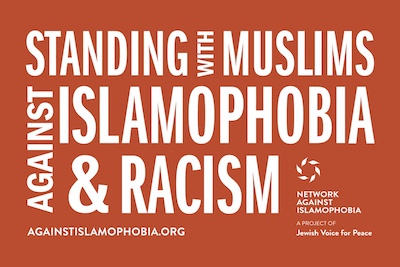