Over 1,500 Palestinians from neighborhoods in Jerusalem are facing threat of forced displacement and home demolitions by Israeli authorities. Children make up a large percentage of the families threatened with homelessness.
Recently Israeli courts have ruled in favor of Jewish settlers and given four families in the Sheikh Jarrah neighborhood until May to leave their homes. In the Silwan neighborhoods of Al Bustan and Batin al Hawa, a total of 21 families are facing home demolition as soon as May 11th to make way for an allegedly bible-inspired ‘King David Park’ tourist site.
This is part of Israel’s larger plan of racist colonial expansion throughout East Jerusalem and the West Bank, forcibly displacing Palestinian families from their land and homes and replacing them with illegal Israeli settlements.
Two of the primary settler organizations driving these evictions, Nahalat Shimon International and Ateret Cohanim, respectively are registered and have tax-deductible charity status in the United States, from where they receive the majority of their funding.
“What we are witnessing in Sheikh Jarrah is Israel’s attempt to erase the Palestinian presence from our native city in real time,” says Mohammed El-Kurd, whose family is among those set to be forcefully evicted in May. “This fate of dispossession looms over much of my neighborhood. Our lives are consumed by the anxiety of living on the brink of homelessness.”
Take action:  call on the U.S. Secretary of State Tony Blinken and Secretary of Defense Lloyd Austin to demand an end to Israel illegal evictions of Palestinians and demolitions of their homes.
SIGN THIS PETITION HERE 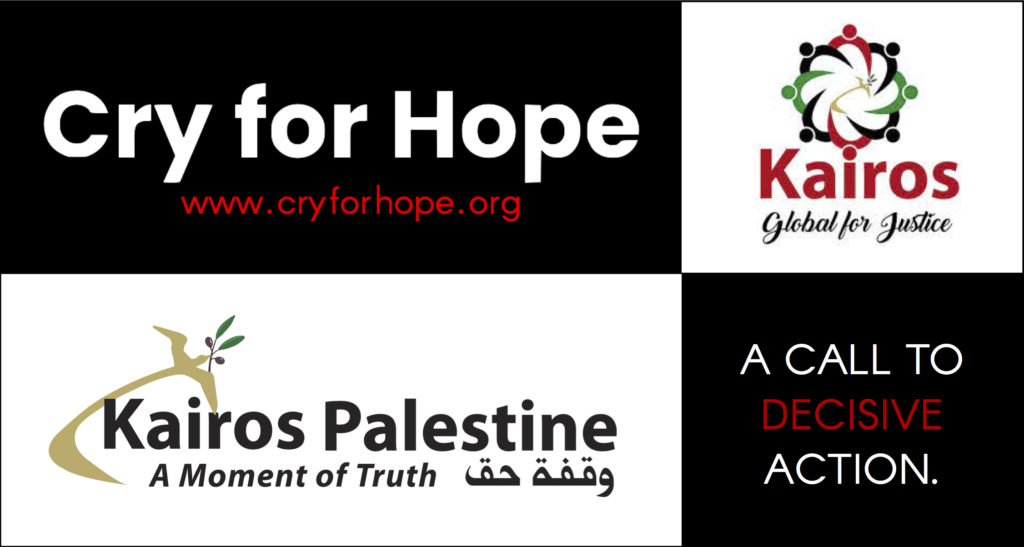 Endorse “Cry for Hope” the 2020 Call
from Palestinian Christians

“Can you help us get our freedom back?” The Palestinians called out to the world in 2009 in the Kairos Palestine Document “A Moment of Truth: a word of faith, hope and love from the heart of Palestinian suffering.” Kairos Palestine set in motion a global movement, rousing churches to action and awakening civil society to the reality of Palestinian suffering. But the oppression and land taking did not stop.
“Cry for Hope” joins with movements of oppressed peoples around the world in taking a stand against the politics and economics of Empire, a global order of domination manifesting in racial, economic, cultural, and environmental oppression that threatens humanity and all of creation. It calls on churches, ecumenical organizations, concerned advocates from other faith traditions, and partners from all sectors of civil society to undertake these seven actions:
• Initiate processes at local, denominational and ecumenical levels that lead to decisive action regarding the denial of Palestinian rights.
• Confront theologies and understandings of the Bible that justify the oppression of the Palestinian people.
• Support Palestinian resistance, including Boycott Divestment and Sanctions and direct political advocacy.
• Demand that governments and world bodies employ political, diplomatic and economic means to stop Israel’s violations of human rights and international law.
• Oppose equating criticism of Israel with anti-Semitism.
• Support initiatives between Israelis and Palestinians and interfaith partnerships that oppose apartheid and create opportunities to work together for justice and equality.
• Come and see the reality in the Holy Land to stand in solidarity with grassroots initiatives for a just peace.
TAKE ACTION
Join the community of individuals, churches and organizations the world over standing for justice and equality.  Read “Cry for Hope: a Call to Decisive Action,” available in multiple languages. Join the Facebook community to share how you are responding to “Cry for Hope.”