[The following introductory text is adapted from FMEP website pages; see those in the Resources list farther below.] 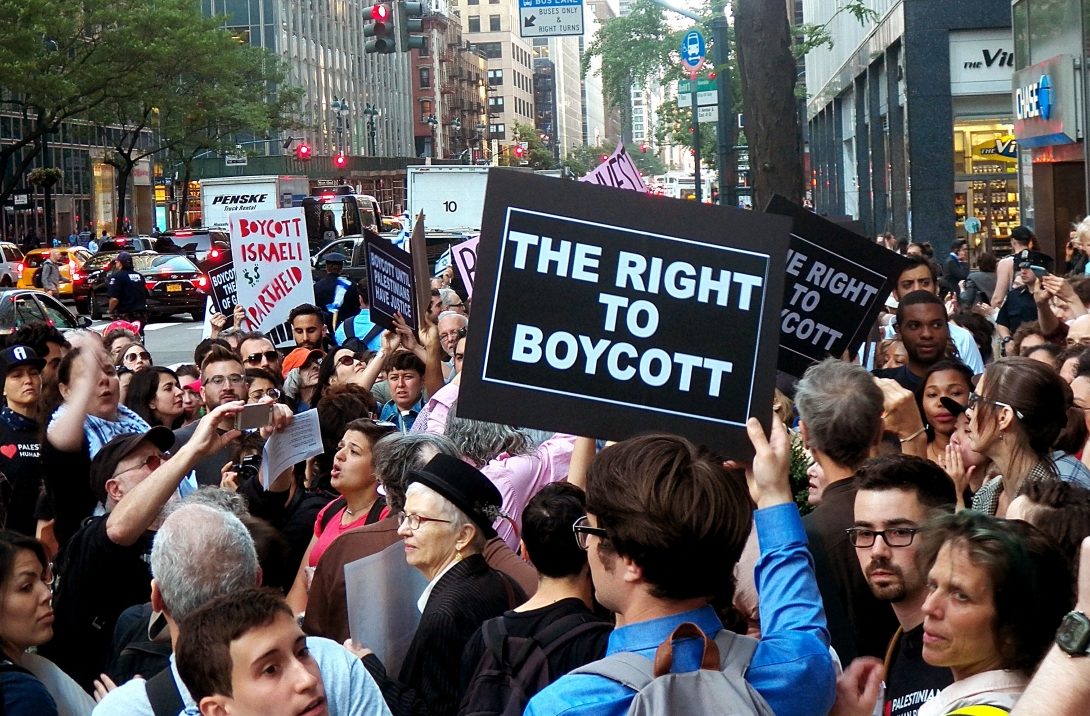 Beginning in 2014, opponents of the BDS movement began promoting legislation in various U.S. states denouncing it and seeking to penalize support for it.

In 2015, these efforts expanded to the U.S. Congress to use concerns about BDS campaigns in order to pass legislation that, in addition to penalizing BDS action, would give unprecedented legitimacy and recognition to Israeli settlements by making it U.S. policy to treat the settlements as part of Israel.

In 2016, a number of states adopted legislation for those to states boycott, divest from, and sanction entities that engage in BDS actions, or that in any concrete way differentiate between Israel and the settlements. In addition to conflating settlements and Israel, much of this legislation is patently unconstitutional. These efforts in state legislatures have continued through 2017.

In 2017, there has been widespread concern about and activism in opposition to Congressional legislation that would penalize support for BDS campaigns.

See a fuller overview of concerns regarding this legislation in an ACLU article below.

This page focuses primarily on federal anti-bds legislation.
For legislation happening in over 2 dozen US states, see this page at Palestine Legal. 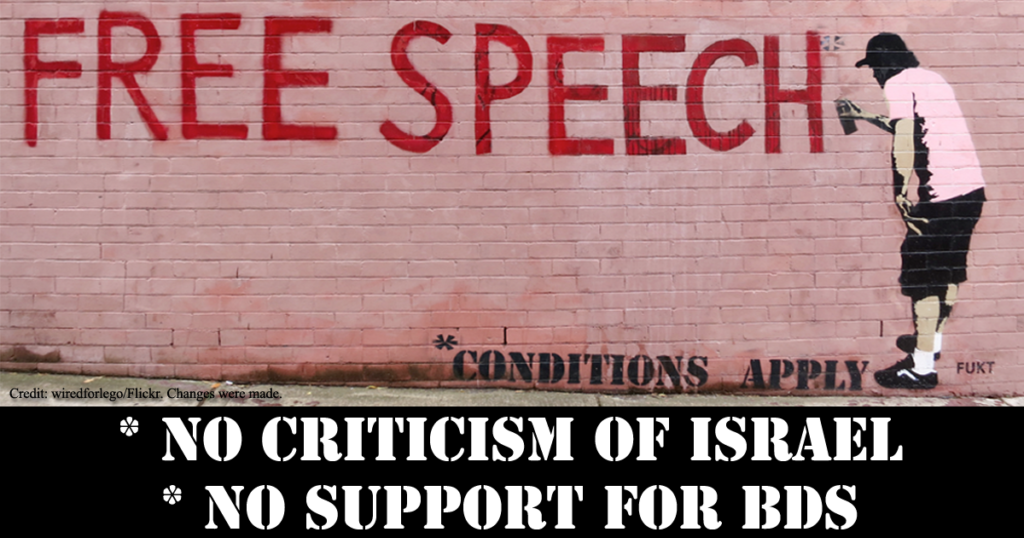 • More Resources: Collections of news, expert analysis, and commentary regarding this legislation. Includes links to several videos.
** Resources from Palestine Legal
** Resources from US Campaign for Palestinian Rights
** FMEP Resources

• US Campaign for Palestinian Rights – Action Alert – Say NO to the Israel Anti-Boycott Act See it, take action

(in chronological order of publication)

Join CMEP for a LIVE Webinar! Lara Friedman, President of the Foundation for Middle East Peace, in conversation with CMEP’s Executive Director Rev. Dr. Mae Elise Cannon will provide analysis of the Israel Anti-Boycott Act, the concerns it raises, and opportunities for you to oppose the legislation.

RSVP: Please register to receive a link to the live webinar

Lara Friedman, President of Foundation for Middle East Peace (FMEP):
Lara Friedman formerly served as the Director of Policy and Government Relations for Americans for Peace Now. As a former U.S. Foreign Service Officer, Lara Friedman served in Jerusalem, Washington, Tunis, and Beirut (and briefly in Khartoum). Widely recognized as an authority on U.S. policy in the Middle East, Congress and the Middle East, Israeli settlements, and Jerusalem, Lara meets frequently with Members of Congress and congressional staff, Administration officials, foreign diplomats, and other members of the foreign policy community. She is a trusted resource for journalists and policymakers, and regularly publishes opinion and analysis pieces in the U.S. and Israeli press, including at the Times of Israel, Huffington Post, Newsweek/the Daily Beast, The Forward, Haaretz, and
LobeLog. She also works closely with the Jerusalem expert Danny Seidemann and has participated in Track II peace efforts, including the Jerusalem Old City Initiative.

The First Amendment Protects the Right to Boycott Israel [1] 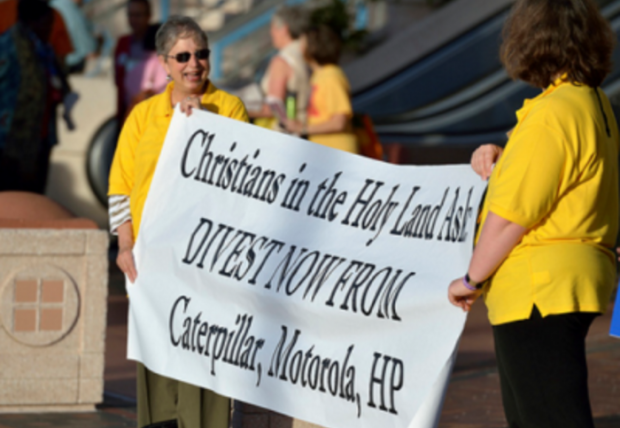 Earlier this week, the ACLU sent a letter [2] to members of Congress opposing the Israel Anti-Boycott Act [3]. The bill would amend existing law to prohibit people in the United States from supporting boycotts targeting Israel — making it a felony to choose not to engage in commerce with companies doing business in Israel and its settlements in the occupied Palestinian territories. Violations would be punishable by a civil penalty that could reach $250,000 and a maximum criminal penalty of $1 million and 20 years in prison.

The bill is aimed at advocates of boycotts targeting Israel, most notably the Boycott, Divestment, Sanctions (BDS) movement — a global campaign that seeks to apply economic and political pressure on Israel to comply with international law. Specifically, the bill sponsors intend the act as a response to the U.N. Human Rights Council’s 2016 resolution [4] calling on companies to respect human rights [5], including in occupied Palestinian territories.

No matter what you think about the Israeli-Palestinian conflict, one thing is clear: The First Amendment protects the right to engage in political boycotts.

In fact, the right to boycott is one of the brightest stars in our constitutional firmament. The American Revolution was founded [6] on boycotts against British goods to protest excessive taxes. John Jay led [7] a boycott against New York merchants who engaged in the slave trade. And the Montgomery bus boycott [8] of 1955–1956 was a major turning point in the struggle for civil rights in the Jim Crow South. In the 1970s and 1980s, colleges and universities led a widespread campaign [9] to boycott and divest from South Africa, in protest of apartheid. In 2015, football players at the University of Missouri went on strike [10] until the school addressed acute racial tensions on campus. And North Carolina’s law prohibiting transgender people from accessing restrooms and other facilities consistent with their gender identities sparked [11] massive boycotts by businesses and individuals.

Boycotts are a form of collective action that allows ordinary people to make their voices heard. For precisely this reason, the Supreme Court has held that the First Amendment protects the right to boycott. The court’s landmark decision in NAACP v Claiborne Hardware Co. [12] affirmed the constitutional right of NAACP activists to hold a mass economic boycott of white-owned businesses in Port Gibson, Mississippi, to protest the community’s persistent racial inequality and segregation. In ringing language, the court held that the boycotters’ exercise of their rights to “speech, assembly, and petition . . . to change a social order that had consistently treated them as second-class citizens” rested “on the highest rung of the hierarchy of First Amendment values.”

This is a proud constitutional legacy. Today, though, the right to boycott is under assault. Over the past several years, federal, state, and local legislators have introduced wave after wave [13] of legislation seeking to stamp out boycotts and divestment campaigns aimed at Israel. One such law, passed earlier this year by Nassau County in New York, prohibits the county from doing business with people who support the BDS movement. As a result, Roger Waters of Pink Floyd fame could be banned [14] from playing at the Nassau Coliseum in New York. Similar laws have been passed in Arizona [15] and Kansas [16].

None of them comport with the First Amendment.

The Israel Anti-Boycott Act introduced in Congress goes a step further, threatening severe civil and criminal punishment against individuals who refrain from doing business with Israel because of their political opposition to its government’s actions. The bill amends two existing laws, the Export Administration Act of 1979 [17] and the Export-Import Bank Act of 1945 [18], which prohibit certain boycotts sponsored by foreign governments.

The bill would expand the application of those laws in a number of ways. It would expand the laws to prohibit boycotts called for by international organizations, like the United Nations and the European Union; it would threaten sanctions against people who boycott businesses operating in Israeli settlements in the occupied Palestinian territories; and it would prohibit even requests for information about companies’ business relationships with Israel and Israeli companies. This expansive language would likely chill a wide range of political activity in the United States directed at the Israeli government — activity that is constitutionally protected, regardless whether members of Congress agree with it.

A number of the bill’s sponsors were apparently surprised [19] by the ACLU’s free speech concerns with the bill. Several of them have now expressed their intention to review the legislation with the ACLU’s civil rights and civil liberties concerns in mind. We hope they do the right thing by backing away from any bill that violates our First Amendment rights.

US Campaign for Palestinian Rights

Includes:
A series of four Infographics that illustrate how this legislation would affect U.S. citizens

Action Alert to Contact Congress – go there, take action
– and their previous alerts in 2017

The Stealth Campaign to Support Settlements – In Congress
http://fmep.org/wp/wp-content/uploads/pending-BDS-Conflation-bills-in-Congress.pdf

The Stealth Campaign to Support Settlements – in States:
http://fmep.org/resource/stealth-campaign-use-u-s-law-support-settlements-taking-battle-states-updatedexpanded-table/

Foreign Policy Journal – ‘The Palestine Exception’: War on BDS is now a War on American Democracy
Read it

Mondoweiss – Critics of U.S. ‘Israel Anti-Boycott Act’ say even requests for information could expose citizens to penalties
Read it

Vice.com – Boycotting Israel Could Soon Land You in Prison
Read it

VIDEO – AMP – Bill S.720, Israel Anti-Boycott Act
Watch it above on this page

The Forward – Where I Stand On Israel BDS First Amendment, by Senator Kirsten Gillibrand
Read it