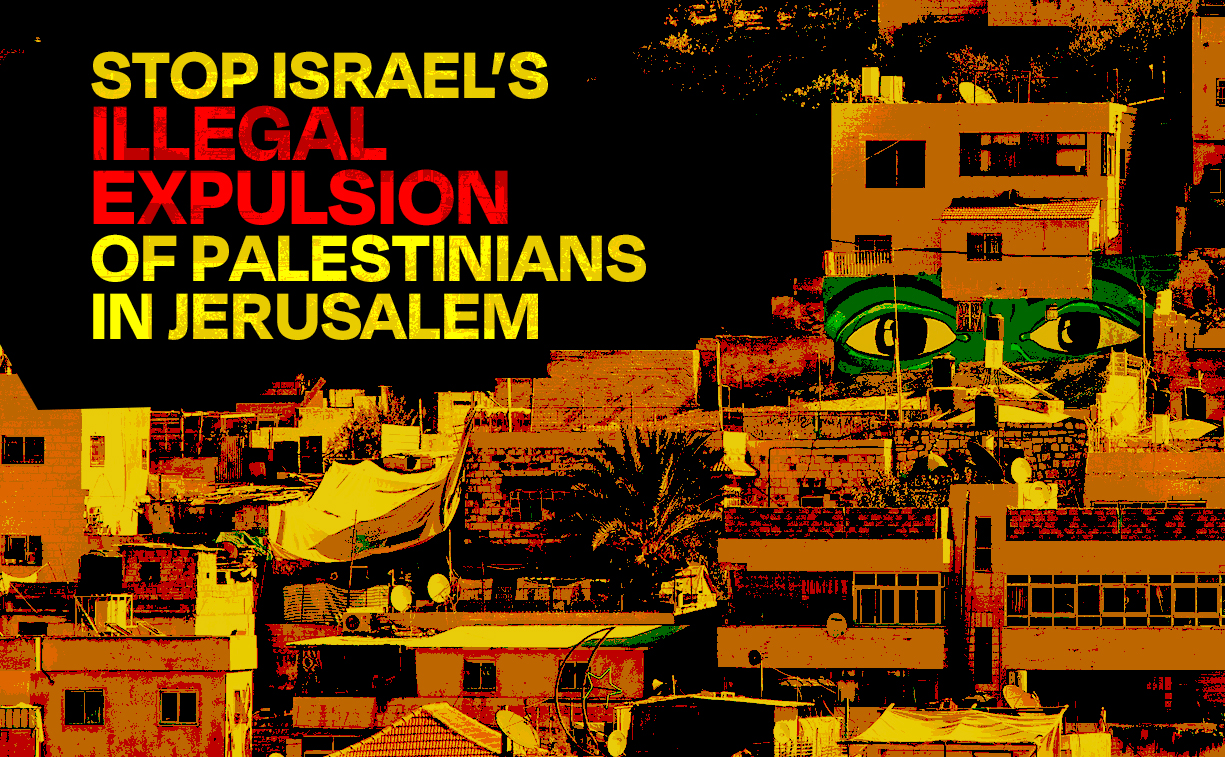 Israel made plans for expulsions and home demolitions to happen in May 2021 that would target well over 1,500 Palestinian residents in Sheikh Jarrah, Silwan and other historically Palestinian neighborhoods in occupied East Jerusalem.

[UPDATE: Those expulsions and demolitions did not happen in spring 2021, in part due to the outcry of justice advocates around the world. But those thousands of Jerusalem residents are not safe in their homes and communities. We continue to advocate to #SaveJerusalem.]

Background: Jerusalem for Jews only

The “Judaization” of East Jerusalem has been in progress  since the military conquest of the West Bank by Israel in June 1967, beginning with the total destruction of the historic 600-year-old Moughrabi (“Moroccan”) section of the Old City to make way for the “Western Wall Plaza” within 3 weeks of the taking of the Old City. It has included not only the incremental taking of non-Jewish property with the Old City Walls but the ethnic cleansing of Palestinian neighborhoods to the north, east and west of the Old City. The goal has been not only the judaization of Jerusalem but the encirclement of the city by a ring of Jewish settlements, effectively cutting it off from the West Bank and preventing the establishment of a Palestinian capital in East Jerusalem.

The historic Sheikh Jarrah and Silwan neighborhoods to the north and south of the Old City respectively have been the focus of local Palestinian and international protest for some time. The B’tselem report on the Batan al-Hawa neighborhood of Silwan and Jeff Wright’s recent piece in Mondoweiss provide background and context for the wholesale evictions planned by Israel.

Michael Lynk, United Nations Special Rapporteur on Human Rights in the Palestinian Territory, has publicly stated: “[t]he eviction orders are not random but appear to be strategically…aimed at clearing the way for the establishment of more illegal Israeli settlements and fragmenting East Jerusalem from the rest of the West Bank.”

Mohammed El-Kurd, whose family is among those threatened with eviction on May 2, has said ““What we are witnessing in Sheikh Jarrah is Israel’s attempt to erase the Palestinian presence from our native city in real time. This fate of dispossession looms over much of my neighborhood. Our lives are consumed by the anxiety of living on the brink of homelessness.”

The expulsion of these Palestinian families is being spearheaded by colonial settler groups with the support of the Israeli government. Two of the primary settler organizations driving these evictions, Nahalat Shimon International and Ateret Cohanim, respectively are registered and have tax-deductible status in the United States, where they receive the majority of their funding.

In March 2021, 14 Palestinian and regional organizations sent an urgent appeal to an agency of the United Nations.
In April, Palestinian families sent an appeal to the Prosecutor of the International Criminal Court (ICC)
The United States government  provides billions of U.S. tax dollars in annual military funding for Israel.  Accordingly, a coalition of organizations from Palestine and the U.S. has been organizing actions to call on President Biden, the U.S. Secretaries of State and Defense, and the U.S. Congress to intervene on behalf of these families in Jerusalem,  demanding that Israel cease all plans for the ethnic cleansing of Palestine.

Scroll down for these statements and links for taking action.

SIGN the Petition to U.S. Secretaries of State and Defense:

An Urgent Call to His Holiness Pope Francis, the global ecumenical movement and World Council of Churches

Join the Palestinian Christians: Resist the Ethnic Cleansing of East Jerusalem
Your sisters and brothers in Palestine implore you to resist the State of Israel’s impending eviction of 15 families from their homes in the Israeli-occupied territory of East Jerusalem….
We don’t understand the reluctance of many leaders in the global church to use the words apartheid and ethnic cleansing to describe the laws and practices of the State of Israel in relation to its Palestinians citizens and the nearly 5.2 million Muslims and Christians in the West Bank, Gaza and East Jerusalem. We reject their hesitancy to condemn the political program of Zionism, fearing the charge of antisemitism. Many Jews and Jewish organizations—both in Israel and around the world—have led in exposing the reality of Israel’s apartheid regime and decried its impunity on the international stage.
See the full statement on our website; download it

On 22 April 2021, representatives of 28 Palestinian families constituting approximately 500 Palestinians from Sheikh Jarrah neighbourhood in occupied East Jerusalem, and 191 endorsing organisations, sent a letter to the Office of the Prosecutor of the International Criminal Court (ICC), calling to urgently include the imminent forced displacement of Palestinians from Sheikh Jarrah as part of the open investigation within the Situation in the State of Palestine.
Learn more from the Palestinian human rights monitor, Al Haq, about this comprehensive report and appeal
Download this document 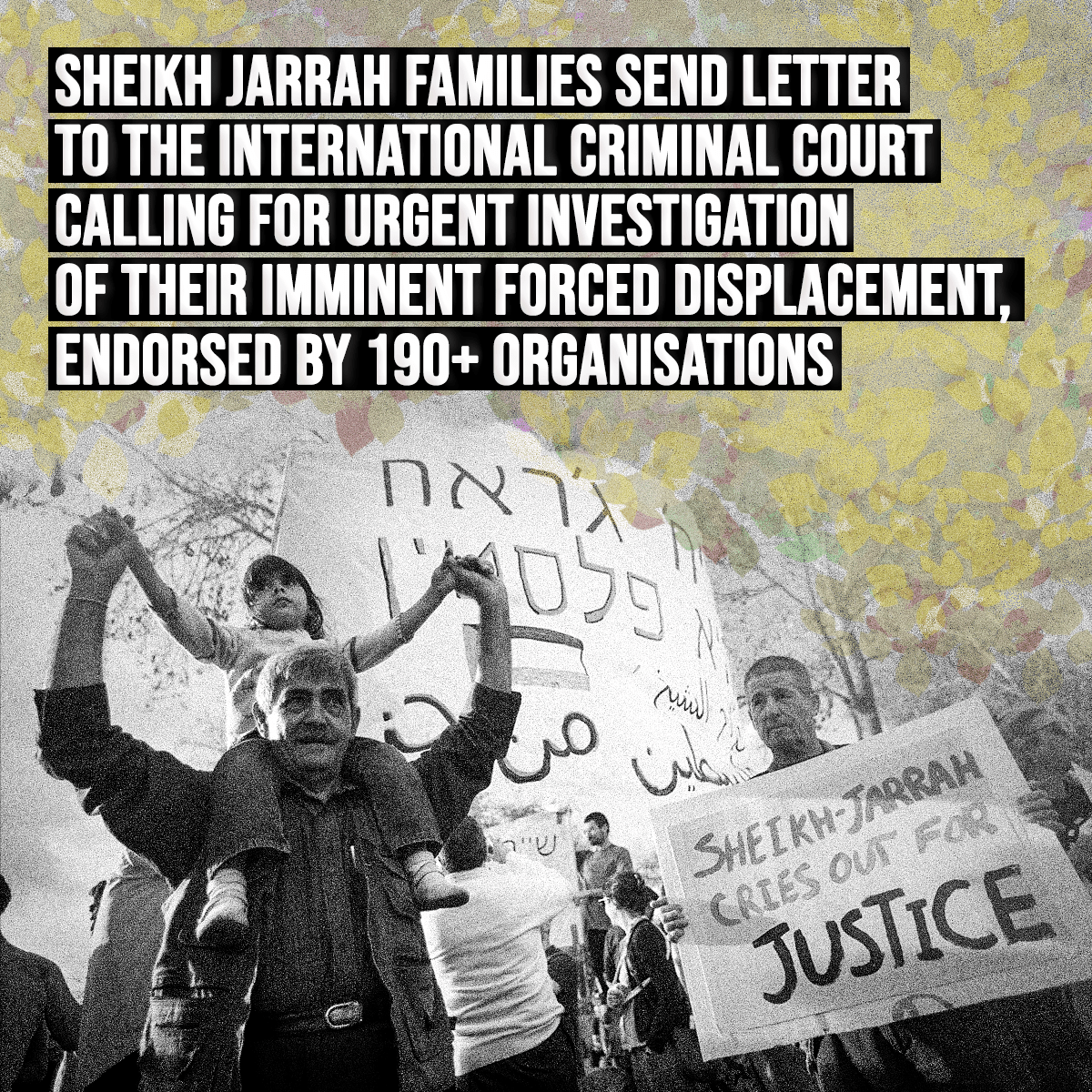 “As representatives of U.S. churches and faith-based organizations with a presence in or connections to Israel and Palestine, we write to request your immediate action to halt the imminent displacement of up to 2,000 Palestinians in Jerusalem.”
Read the letter on our website and download

Pax Christi International urges the United Nations Security Council to oppose the impending home evictions by Israel in the neighbourhoods of Sheikh Jarrah and Silwan. See their announcement and download the letter

Four Christian leaders in Sweden present numerous arguments, besides the requirements of international law, for Israeli jurisprudence to protect the rights of Palestinians threatened with forced expulsions.  See the letter on our website and download it

Systematic dispossession of Palestinian communities in Sheikh Jarrah and Silwan
Peace Now  •  27 May 2018
In recent years there has been an increase in the threat of expulsion hovering over the communities of Sheikh Jarrah and Silwan in East Jerusalem. A wave of eviction lawsuits is being conducted before the courts, with well-organized and well-funded settler groups equipped with direct or indirect assistance from government agencies and the Israeli General Custodian.Read more

The District Court Rejected the Appeal of 6 Families from Sheikh Jarrah
Peace Now   •  16 February 2021
…Yesterday, the families received the verdict in the appeal they filed against the intention to evict them from the four houses where the families have lived for nearly 70 years, in favor of settlers. The court ordered them to vacate their homes within two and a half months until 2 May 2021. The lawsuit is part of an organized move designed to dispossess a Palestinian community of its home and establish a settlement in Sheikh Jarrah in its place.Hundreds of Palestinians in Sheikh Jarrah are in a similar situation in court proceedings, and hundreds more in Batan Al-Hawa in Silwan. Read more

Save Sheikh Jarrah: The online campaign giving hope to Palestinian refugees in East Jerusalem
Middle East Eye  •  22 March 2021
Residents of Karm al-Jaouni live under the threat of forcible eviction that would see them replaced by Israeli settlers. Read more

Save Sheikh Jarrah: Palestinians have a right to remain on their land
Middle East Eye  •  23 March 2021
As Israel continues its ethnic cleansing of Jerusalem’s Sheikh Jarrah district, Palestinians are ramping up pressure on the international community to act. Read more

The Nakba of Sheikh Jarrah: How Israel uses ‘the law’ to ethnically cleanse East Jerusalem
Middle East Monitor  •  23 March 2021
“In occupied East Jerusalem and the West Bank, a massive battle is already underway. On one side, Israeli soldiers, army bulldozers, and illegal armed Jewish settlers are carrying out daily missions to evict Palestinian families, displace farmers, burn orchards, demolish homes and confiscate land. On the other side, Palestinian civilians, often unorganised, unprotected and leaderless, are fighting back.”  Read more

‘It is a Nakba’: Campaign to save Sheikh Jarrah builds momentum as forced displacement looms
Mondoweiss  •  16  April 2021
In a matter of just two weeks, six Palestinian families, numbering 27 people, from the occupied East Jerusalem neighborhood of Sheikh Jarrah will be thrown out of their homes and into the street, and replaced with Israeli settlers. Now residents are doubling down on the campaign to #SaveSheikhJarrah.  Read more