This introduction to the BDS movement is taken from the website of the BDS National Committee (BNC); learn more at: https://bdsmovement.net

See also FAQs about BDS at the website of U.S. Campaign for Palestinian Rights. 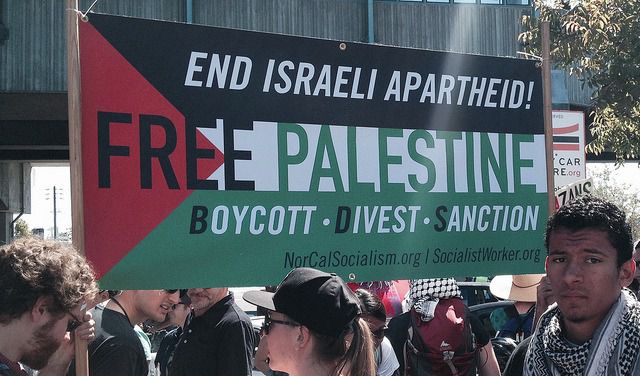 Boycott, Divestment, and Sanctions (BDS) is a Palestinian-led movement for freedom, justice and equality. BDS upholds the simple principle that Palestinians are entitled to the same rights as the rest of humanity.

Israel is occupying and colonising Palestinian land, discriminating against Palestinian citizens of Israel and denying Palestinian refugees the right to return to their homes. Inspired by the South African anti-apartheid movement, the BDS call urges action to pressure Israel to comply with international law.

BDS is now a vibrant global movement made up of unions, academic associations, churches and grassroots movements across the world. Eleven years since its launch, BDS is having a major impact and is effectively challenging international support for Israeli apartheid and settler-colonialism.

What are Boycotts, Divestment and Sanctions?

BOYCOTTS involve withdrawing support for Israel and Israeli and international companies that are involved in the violation of Palestinian human rights, as well as complicit Israeli sporting, cultural and academic institutions.

SANCTIONS campaigns pressure governments to fulfil their legal obligation to hold Israel to account including by ending military trade, free-trade agreements and expelling Israel from international forums such as the UN and FIFA.

The Call for BDS

Inspired by the South African anti-apartheid movement, the Palestinian BDS call urges nonviolent pressure on Israel until it complies with international law by meeting three demands:

1. Ending its occupation and colonization of all Arab lands and dismantling the Wall

International law recognises the West Bank including East Jerusalem, Gaza and the Syrian Golan Heights as occupied by Israel. As part of its military occupation, Israel steals land and forces Palestinians into ghettos, surrounded by checkpoints, settlements and watchtowers and an illegal apartheid Wall. Israel has imposed a medieval siege on Gaza , turning it into the largest open air prison in the world. Israel also regularly carries out large-scale assaults on Gaza that are widely condemned as constituting war crimes and crimes against humanity.

2. Recognizing the fundamental rights of the Arab-Palestinian citizens of Israel to full equality

One-fifth of Israel’s citizens are Palestinians who remained inside the armistice lines after 1948. They are subjected to a system of racial discrimination enshrined in more than 50 laws that impact every aspect of their lives. The Israeli government continues to forcibly displace Palestinian communities in Israel from their land. Israeli leaders routinely and openly incite racial violence against them.

3. Respecting, protecting and promoting the rights of Palestinian refugees to return to their homes and properties as stipulated in UN Resolution 194

Since its violent establishment in 1948 through the ethnic cleansing of more than half of the indigenous people of Palestine, Israel has set out to control as much land and uproot as many Palestinians as it can. As a result of this systematic forced displacement, there are now more than 7.25 million Palestinian refugees. They are denied their right to return to their homes simply because they are not Jewish.

BDS is an inclusive, anti-racist human rights movement that is opposed on principle to all forms of discrimination, including anti-Semitism and Islamophobia.

UMC – PDF: What Does the Lord Require of the Ecumenical Movement Today?  Boycott, Divestment & Sanctions as Nonviolent, Loving Actions, by David Wildman – 11 pp.

UMC – PDF: Working for a Just and Lasting Peace in Israel and Palestine: What You Should Know, How You Can Help – 36 pp. From the General Board of Church & Society and General Board of Global Ministries, United Methodist Church
Designed to help answer questions about the conflict and provide specific actions to help bring about a just, lasting peace with an end to illegal Israeli occupation of Palestinian land. The packet is divided into two sections. The first section, What You Should Know, contains background information, maps and links to personal testimonies from people in the region, church statements, and resources for additional study. The second section, How You Can Help, provides detailed advocacy resources for churches and individuals.