Scroll down to see the books in this category.

These collections of books have been assembled from many sources of recommended reading on Israel/Palestine, including: the United Church of Christ (UCC) and UCC PIN, Sabeel, Israel/Palestine Mission Network (IPMN) in the Presbyterian Church (U.S.A.), Jews for Justice for Palestinians (JFJFP) and others.

Please send us your suggestions for additions to these lists; contact us at [email protected].

The order of the books within each category is random and is not related to the importance of the work. 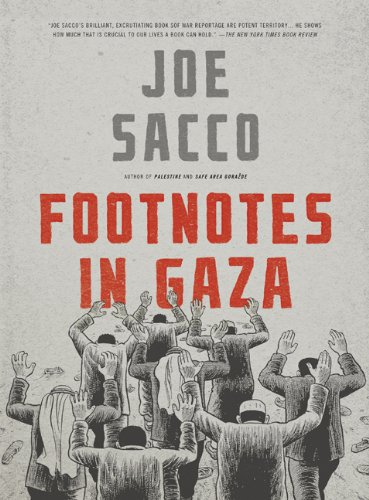 Footnotes in Gaza
By Joe Sacco

Rafah, a town at the bottommost tip of the Gaza Strip, has long been a notorious flashpoint in the bitter Middle East conflict. Buried deep in the archives is one bloody incident, in 1956, that left 111 Palestinians shot dead by Israeli soldiers. Seemingly a footnote to a long history of killing, that day in Rafah―cold-blooded massacre or dreadful mistake―reveals the competing truths that have come to define an intractable war.

In a quest to get to the heart of what happened, Joe Sacco immerses himself in the daily life of Rafah and the neighboring town of Khan Younis, uncovering Gaza past and present. As in Palestine and Safe Area Goražde, his unique visual journalism renders a contested landscape in brilliant, meticulous detail. Spanning fifty years, moving fluidly between one war and the next, Footnotes in Gaza―Sacco’s most ambitious work to date―transforms a critical conflict of our age into intimate and immediate experience.

“Sacco brings the conflict down to the most human level, allowing us to imagine our way inside it, to make the desperation he discovers, in some small way, our own.”
―Los Angeles Times 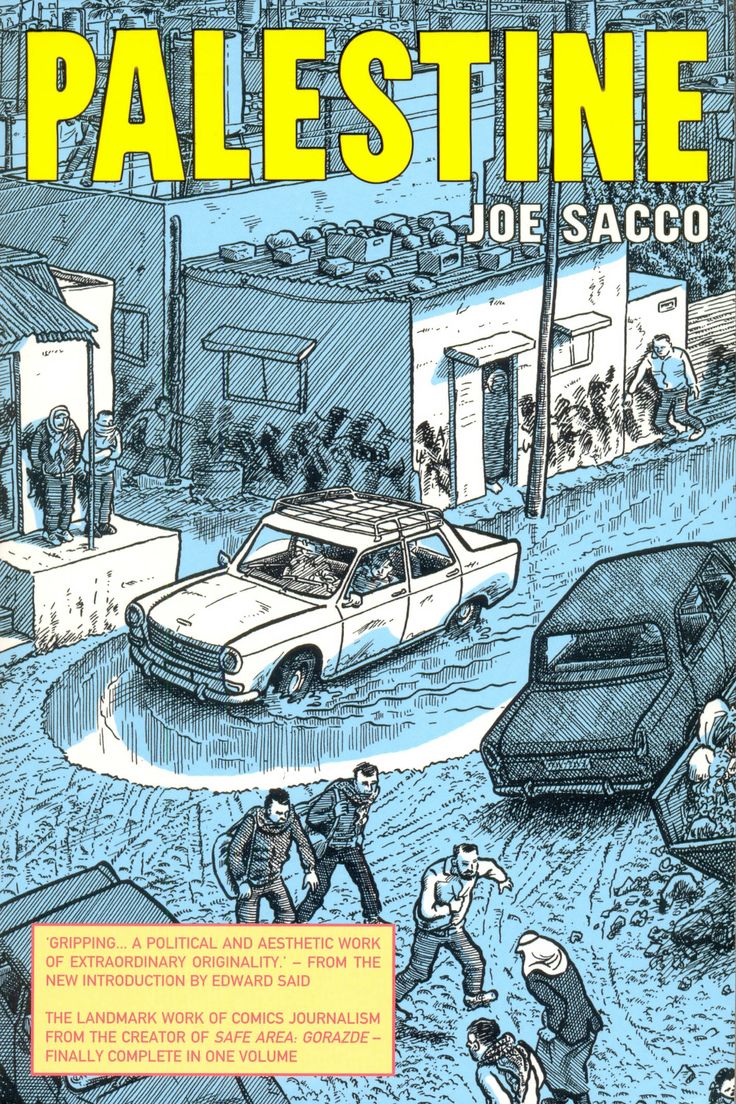 The landmark of comics journalism in an expanded and re-designed edition that includes a host of unseen supplemental material, including background notes, sketches, reference photos, a new interview with Sacco, and much more.

The definitive, expanded, hardcover collection of Sacco’s landmark of comics journalism, Palestine: The Special Edition is more than a new edition: consider it the “Criterion” Palestine. In addition to the original, 288-page graphic novel and introduction by the late Edward Said, The Special Edition includes a host of unique material never before published, including many of Sacco’s original background notes, sketches, photographic reference, and much more. The book also includes a new, introductory interview with Sacco about the making of the book as well as a new cover and design. Palestine: The Special Edition will be a cornerstone of any serious comic collection. With the Middle East’s role in contemporary world politics, Sacco’s Palestine has never been more relevant or more valuable to a country desperate to understand this long-running conflict.

Based on several months of research and an extended visit to the West Bank and Gaza Strip in the early 1990s (where he conducted over 100 interviews with Palestinians and Jews), Palestine was the first major comics work of political and historical nonfiction by Sacco, whose name has since become synonymous with this graphic form of New Journalism. Sacco’s insightful reportage takes place at the front lines, where busy marketplaces are spoiled by shootings and tear gas, soldiers beat civilians with reckless abandon, and roadblocks go up before reporters can leave. Sacco interviewed and encountered prisoners, refugees, protesters, wounded children, farmers who had lost their land, and families who had been torn apart by the Palestinian conflict. 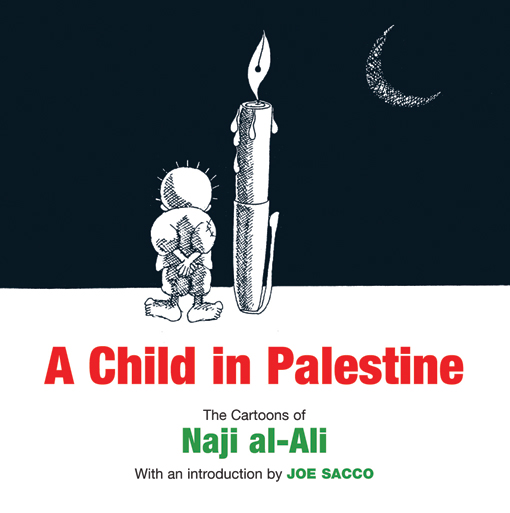 A Child in Palestine: The Cartoons of Naji al-`Ali

Naji al-Ali grew up in the Palestinian refugee camp of Ain al-Hilweh in the south Lebanese city of Sidon, where his gift for drawing was discovered by the Palestinian poet Ghassan Kanafani in the late 1950s. Early the following decade he left for Kuwait, embarking on a thirty-year career that would see his cartoons published daily in newspapers from Cairo to Beirut, London to Paris.
Resolutely independent and unaligned to any political party, Naji al-Ali strove to speak to and for the ordinary Arab people; the pointed satire of his stark, symbolic cartoons brought him widespread renown. Through his most celebrated creation, the witness-child Handala, al-Ali criticized the brutality of Israeli occupation, the venality and corruption of the regimes in the region, and the suffering of the Palestinian people, earning him many powerful enemies and the soubriquet “the Palestinian Malcolm X.”

For the first time in book form, A Child in Palestine presents the work of one of the Arab world’s greatest cartoonists, revered throughout the region for his outspokenness, honesty and humanity.
“That was when the character Handala was born. The young, barefoot Handala was a symbol of my childhood. He was the age I was when I had left Palestine and, in a sense, I am still that age today and I feel that I can recall and sense every bush, every stone, every house and every tree I passed when I was a child in Palestine. The character of Handala was a sort of icon that protected my soul from falling whenever I felt sluggish or I was ignoring my duty. That child was like a splash of fresh water on my forehead, bringing me to attention and keeping me from error and loss. He was the arrow of the compass, pointing steadily towards Palestine. Not just Palestine in geographical terms, but Palestine in its humanitarian sense—the symbol of a just cause, whether it is located in Egypt, Vietnam or South Africa.”—Naji al-Ali, in conversation with Radwa Ashour 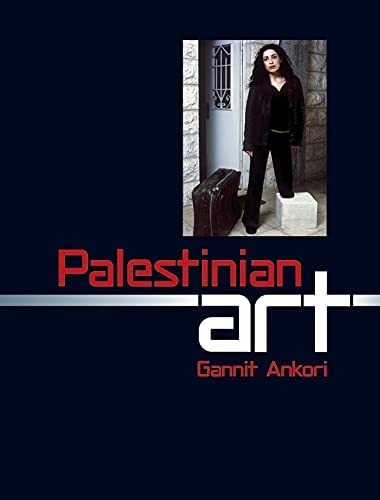 Turmoil and violence have defined the lives of Palestinian people over the last few decades, yet in the midst of the chaos artists live and thrive, creating little-seen work that is a powerful response to their situation. Gannit Ankori’s Palestinian Art is the first in-depth English-language assessment of contemporary Palestinian art, and it offers an unprecedented and wholly original overview of this art in all its complexity.

“Gannit Ankori’s book Palestinian Art, a prime model of art historical research, deviates from the narrow confines of the discipline and must be read as a cultural document . . . and as an expression of an ethical position espoused by a scholar in times of continued occupation. . . . The analysis of the diverse artworks is rich and fascinating because it interweaves the visual with the theoretical and the biographical.”
― Afterimage

“Provides its readers a documentary-like and cinematic experience while teaching them about the history and culture of a troubled land. . . . Ankori’s vision suggest an inclusive method of looking at art. It is a blueprint for writers and readers to study on how writing the cultural history of a nation is possible.”
—Doris Bittar, Al Jadid

“This engaging study is the first substantial English-language publication to cover the topic. . . . Her insightful interpretations and analyses of individual works are enriched by numerous high quality color photographs. Ankori does an excellent job of balancing an interpretation of the work of individual artist with placing them in the context of the historical, political, cultural, and symbolic meanings inherent in Palestinian art. . . . Writes in a style that is authoritative yet accessible. . . .This book holds a unique place in the literature is highly recommended.”
—Judy Dyki, ArLIS 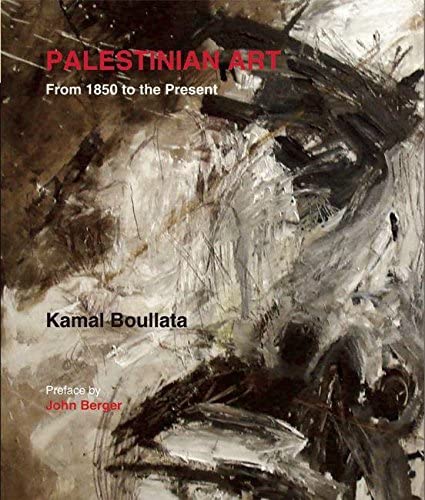 Palestinian Art: From 1850 to the Present
By Kamal Boullata

Kamal Boullata offers the first insider’s study of Palestinian art. The only authoritative account in English yet published, this scholarly analysis presents insights into the development of Palestinian art before and after the cataclysmic events of 1948 during which Palestinian society was uprooted and dispersed.

Palestinian Art includes the pioneering work of those who ventured into easel painting before 1948, of refugees who made their debut in the Arab world and whose art left its deep imprint on the development of modern Arab art, and more recent work by artists making inroads into the international art scene.

Boullata also discusses the work of artists who continued to live in their homeland. Representations of home and exile, the ongoing struggle between innovation and tradition, the relationship between verbal and visual expression and the role of women artists in Palestinian modernism are key areas of focus in this work.

The book covers artists using conventional studio techniques such as painting, sculpture and mixed media, as well as younger artists employing tools such as video, photography and installation.

With a preface by John Berger, and over 200 colour and black and white illustrations this compendium is essential for the expert and enlightening for the general reader.

‘It is rare and exciting to find an art book full of persuasive, urgent visual imagery whose language and strategies are ultimately unfamiliar to the complacent western eye.’
—The Guardian

‘Weaving intimate reference and archival research with scholarly analysis, Palestinian Art offers the reader an unprecedented depth of insight into the political context and aesthetic concerns of Palestinian art throughout its troubled history.’
—Jean Fisher, author of Vampire in the Text: Narratives of Contemporary Art

‘Boullata’s historical writings and art criticism in Arabic, English and French have become the standard by which all other writings on Palestinian art are measured.’
—Joseph Massad, Art Journal

Reflections on Palestinian Art: Art of Resistance or Aesthetics
By Faten Mitwasi

In this book, Faten Nastas Mitwasi views Palestinian history through art. She presents an excellent overview of Palestinian art and, more importantly, she analyzes it in the context of the different historical phases in which it was produced. Nastas presents a brief account of the development of Palestinian art throughout history, but her primary focus is on Palestinian art produced during the 20th century and beginning of 21st century. The book offers in-depth reflections and examines the works of contemporary Palestinian artists in relation to the poetry of Mahmoud Darwish, the art theory of Jacques Ranciere and other theories that raise questions about aesthetics, resistance, history, nationality, identity, belonging and hybridity. 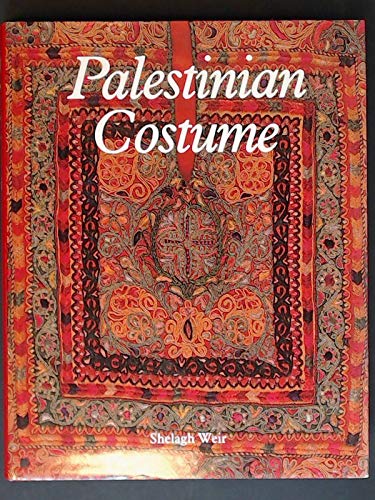 The traditional costumes of the Palestinian villagers and Bedouin are of exceptional beauty and diversity, especially the festive costumes of the women with their lavish silk embroidery and patchwork and their dramatic headdresses encrusted with coins. This book surveys male and female fashions from the early nineteenth century to the end of the twentieth, and describes the main regional styles of costume, their materials and ornamentation, against the background of Palestinian life and culture. The emphasis throughout the book is on the social and symbolic significance of costume, and the final chapters analyze in detail the language of costume in the context of the wedding.The book is based on extensive field research the author has conducted at intervals since 1967 among Palestinians in Israel, the Occupied Territories, and Jordan. The illustrations include studio photographs of magnificent garments in museum collections, archive photographs from the nineteenth and early twentieth centuries, and recent photographs of costumes still made and worn.

“The product of over 20 years of serious research, this lavishly illustrated work discusses Palestinian textiles and men’s and women’s dress during the 30-year period of British rule prior to 1948. Weir also touches upon 19th-century and modern Palestinian costume while discussing pertinent cultural background and meaning behind changing design and styles. Particular emphasis is given to the wedding ritual and garments of Beit Dajan, a village located about 12 kilometers southeast of Jaffa. The great variety of costumes, illustrated in 200 color and 100 black-and-white photographs, and the excellent interpretive text contribute to a unique and valuable work that should be a part of most research, art, textiles, or Middle East collections.”

“… fascinating contribution to the study of a living culture, rather than simply a museum record. The numerous illustrations range from old photographs to details of brilliant colored embroidery. This is a book to delight the traveler, the textile enthusiast and the scholar alike.”