Enthusiastic, caring, and dedicated. A vision of justice and peace in Palestine and Israel brings internationals human rights monitors to witness life under occupation and go home to promote change.

EAPPI is invited by the local Heads of Churches in Jerusalem. We live closely connected to the communities where we work, walking side by side local Christians and all those suffering in Palestine and Israel. Through our daily encounters we build close relationships with those we interact with. We base our accompaniment on listening to the needs of local communities and consultation and support from an advisory group of Christians, Jews, and Muslims.

The word accompaniment literally means “sharing bread with someone.” Sharing together the basics of life offers EAs the opportunity to listen to and experience others’ struggles.  Truly understanding these struggles gives us a stronger voice against injustice and motivation to advocate for change.

We have more human rights monitors on the ground than any other organization in Israel and Palestine.  At any given time, 25 to 35 EAs are in the field providing protective presence and protective advocacy on a daily basis. We are often the first on the ground to respond.  Our knowledge and expertise is valued by a wide-network of international organizations and UN agencies in Israel and Palestine.

We believe that together we can raise a stronger voice against injustice. That’s why we work with a broad collaboration of local Israeli and Palestinian organizations working toward a just peace as well as locally based international human rights institutions and UN agencies.

Acting together as people of various faith traditions, belief systems and ideological frameworks, our EAs return home to 21 countries where they work across advocacy networks to promote change in local churches, ecumenical organizations, political organizations, and governments.

In 2017, the World Council of Churches (WCC) Ecumenical Accompaniment Programme in Palestine and Israel (EAPPI) will mark 15 years of bringing volunteers to accompany people in Palestine and Israel navigating daily routines, often under duress. The volunteers, proposed by WCC member churches, are known as Ecumenical Accompaniers (EAs) who serve for three months before returning to their church communities. EAs from all age groups aim to offer a protective presence to vulnerable communities, monitoring and reporting human rights abuses. They join Palestinians and Israelis who work in nonviolent ways for peace, and they interact with a myriad of international, Israeli and Palestinian partners.

The work of EAPPI is of direct interest to the International Committee of the Red Cross, United Nations Office for the Coordination of Humanitarian Affairs and the Office of the United Nations High Commissioner for Human which count themselves as among groups with which the programme works. EAPPI also works with UNICEF, the U.N. agency working for the protection of children, the non-governmental organization Save the Children and UNRWA, the United Nations Relief and Works Agency for Palestine Refugees in the Near East. 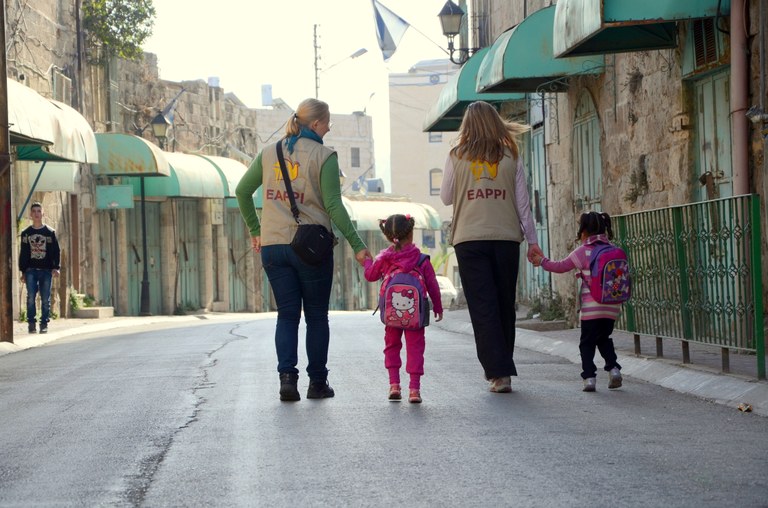 EAPPI works with international groups and non-government organizations (NGOs) in both Israel and Palestine. Other NGOs it works with are the Norwegian Refugee Council, and EAPPI is a member of the East Jerusalem-based Association of International Development Agencies. http://www.aidajerusalem.org/

EAPPI also links up with Israeli groups such as B’Tselem – The Israeli Information Center for Human Rights in the Occupied Territories. It has helped B’Tselem provide information and photographs on activities such the uprooting of Palestinians’ olive trees during Israeli settler expansion. http://www.btselem.org/photo/6080

B’Tselem shared many goals with EAPPI and it says it acts primarily to change Israeli policy in the Occupied Territories and ensure that its government, which rules the territories, protects the human rights of residents there. It wants the government to comply with its obligations under international law. B’Tselem’s reports are taken seriously by the Israeli authorities, say both NGOs and state actors.

In a similar endeavour, Rabbis for Human Rights (RHR) says it has coordinated the participation of other organizations such as EAPPI. Like EAAPI, RHR bases its work on its members’ faith. http://rhr.org.il/eng/2014/12/field-report-2014-olive-harvest/  RHR says it is the only rabbinic voice in Israel that is explicitly dedicated to human rights. It represents more than 100 Israeli rabbis and rabbinical students from different streams of Judaism. It derives its authority from its Jewish tradition and the Universal Declaration of Human Rights. http://rhr.org.il/eng/about/ 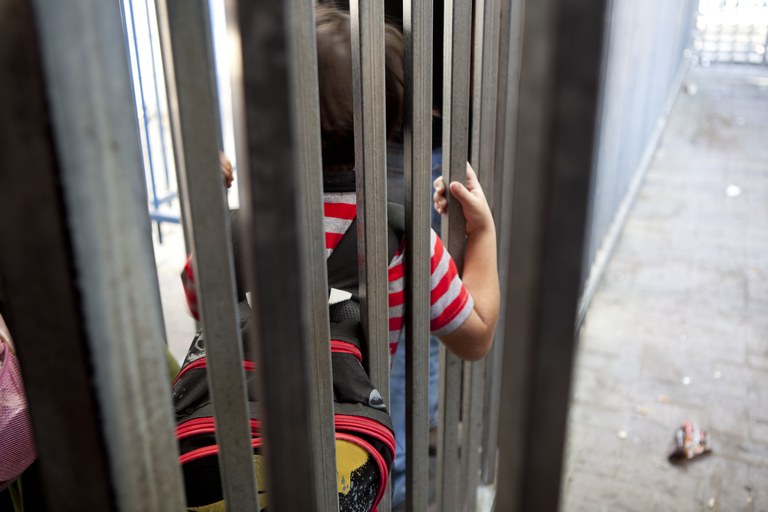 The Israeli group Machsom Watch, Women for human rights and against the occupation, engages in similar work to EAPPI, monitoring the treatment, say, of Palestinian workers coming through daily checkpoints from the West Bank to work in Israel. Its members will meet with EAPPI volunteers and share information as they did in July at a checkpoint into Israel during the Muslim holy month of Ramadan in 2016. https://machsomwatch.org/en/node/53312

Since a lot of EAPPI’s work involves observing and monitoring the treatment of people at checkpoints manned by Israeli soldiers it is natural for those in the programme to work with Breaking the Silence. http://www.breakingthesilence.org.il/about/organization  This is an organization of veteran combatants who have served in the Israeli military since the start of the second intifada and have taken it upon themselves to expose the Israeli public to the reality of everyday life in the occupied territories.

EAPPI also works with the Jerusalem Legal Aid and Human Rights Center, which aims to combat human rights violations regardless of the perpetrating authority, by facilitating access to justice, lobbying and advocacy. http://www.jlac.ps/index.php

Another key partner of the work of EAPPI is Wi’am: The Palestinian Conflict Transformation Center, Bethlehem, a group that prides itself on its policy of waging peace. Among its projects is one creating safe space for children to express themselves through visual arts and crafts projects involving drawing, painting, clay-shaping, and mosaics. http://www.alaslah.org/ 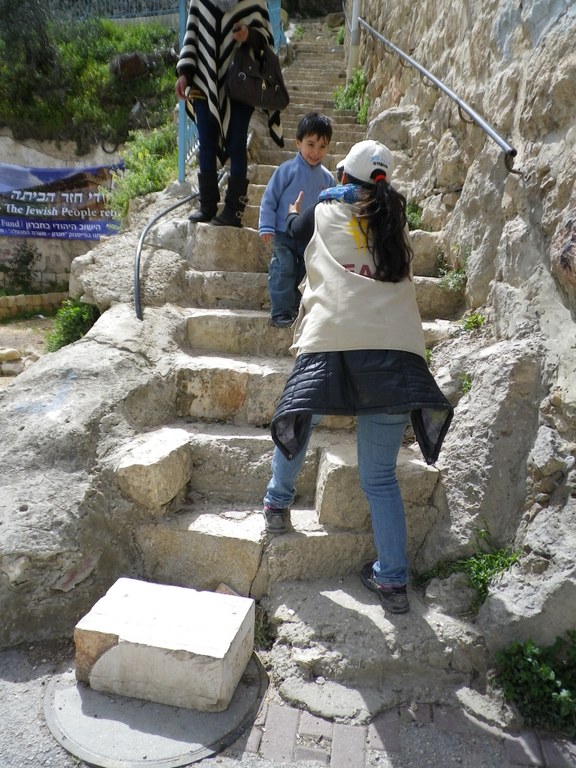 EAPPI also works with the Alternative Tourism Group (ATG), a Palestinian NGO specializing in tours and pilgrimages that include critical examinations of the history, culture, and politics of the Holy Land. ATG encourages tourism to Palestinian areas, which are often not on the path of tourists to sites in the Holy Land, or only fleetingly so. ATG’s aim is to promote a positive image of Palestine and its people and to contribute towards establishing rightful peace in the area. Since its establishment, ATG has provided its services to thousands of people from all over the world. http://atg.ps/about-us

Coming to the Holy Land? Visit our EAPPI teams in one of our 6 placements. Request a delegation visit.

We’ve had EAs from 25 countries. If you can’t come to the Holy Land, why not get someone from your country to share their experience?