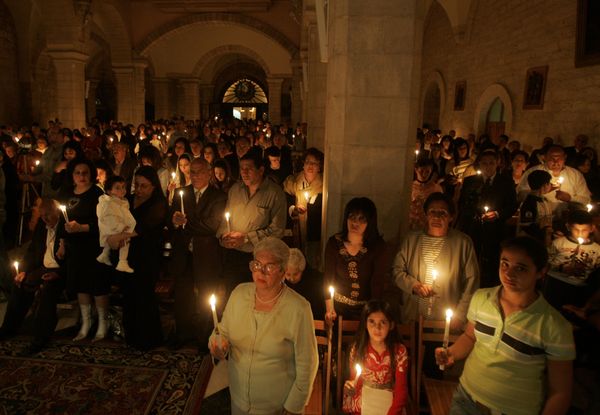 Palestinian Christians are often called the ‘living stones’ of Christianity as they can trace their history to the birth of the Church in this land 2,000 years ago. Ancestors of some families have been in the Holy Land ever since, while others migrated there in later centuries. Therefore they should be understood to be indigenous people of the Holy Land, not immigrants and not recent converts. In fact, they are the oldest Christian population on earth. 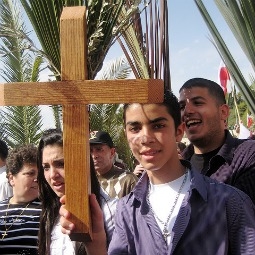 Unfortunately many Christians in other countries do not even know there are Christians in Palestine and view the Palestinian-Israeli conflict as a religious conflict between Muslims and Jews, rather than the struggle over land it truly is. Yet Christians around the world owe much to these indigenous believers and their faithful stewardship of the holiest sites of Christianity. 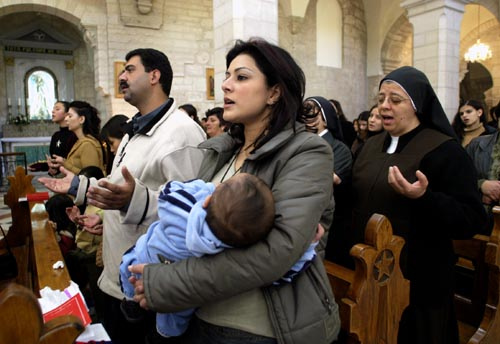 These Christians strongly identify as Palestinians with the same culture and history as their Muslim sisters and brothers. In this land, Christians and Muslims have lived together peacefully for many generations. Today they suffer together under the brutal Israeli occupation and all that it entails: checkpoints, travel restrictions, confiscation of land, destruction of homes, abuse of children, beatings, killings, and more. 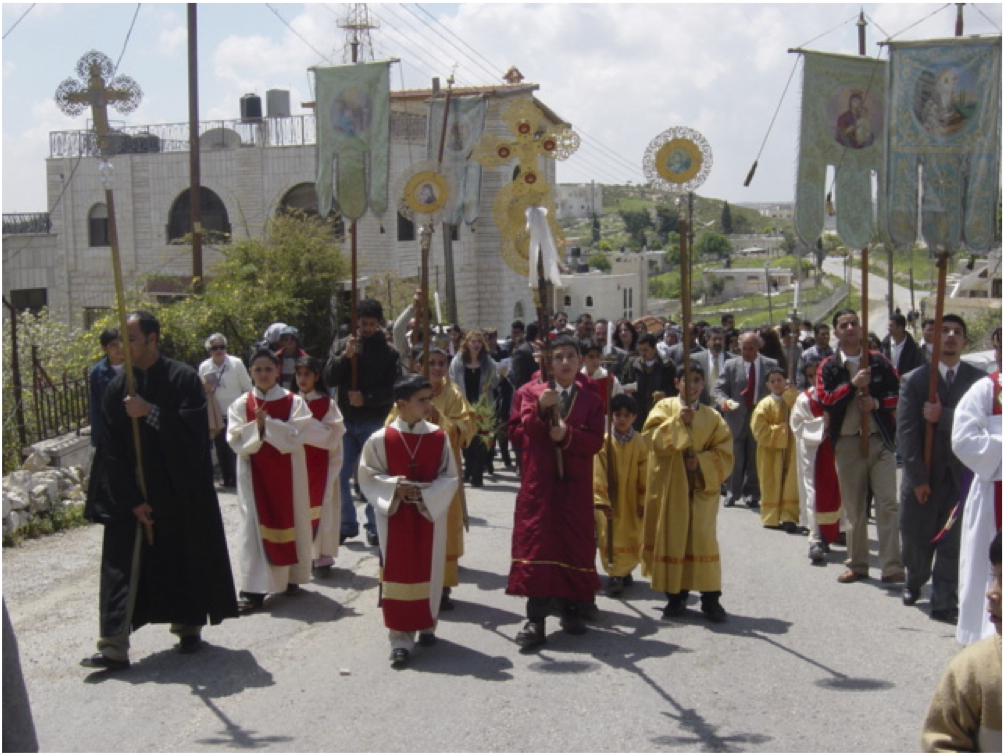 One of the most painful restrictions of the occupation are the limits on their freedom to worship. Tourists from around the world can visit the Church of the Holy Sepulcher in Jerusalem, believed to be the site of Jesus’ burial tomb, yet Palestinian Christians who live only a few miles away cannot reach it without a special permit that they can rarely obtain, even during the Easter season.

For decades, they have been struggling nonviolently for their freedom. In the landmark Kairos Palestine Document – which has been signed by thousands of Palestinian Christians and endorsed by all the Heads and Patriarchs of the Jerusalem Churches – these Christians have issued a powerful call for justice that will lead to real peace. 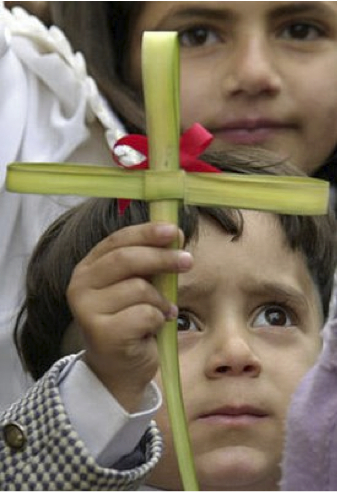 As Desmond Tutu wrote to them on the occasion of the launching of Kairos Palestine in Bethlehem, December of 2009: “We are reminded by Holy Scripture that ‘when one part of the Body suffers, we all suffer’…. You are in my prayers as you launch this very special document. It is filled with grace, where it could have been filled with anger. It is filled with profound and prophetic words, and our God who neither slumbers nor sleeps will hear your cry and will be your Emmanuel.”

In that grace-filled landmark document, the Palestinian Christians’ message to fellow believers is this: “The word of God is a word of love for all His creation. God is not the ally of one against the other, nor the opponent of one in the face of the other. God is the Lord of all and loves all, demanding justice from all and issuing to all of us the same commandments. We ask our sister Churches not to offer a theological cover-up for the injustice we suffer, for the sin of the occupation imposed upon us. Our question to our brothers and sisters in the Churches today is: Are you able to help us get our freedom back, for this is the only way you can help the two peoples attain justice, peace, security and love? 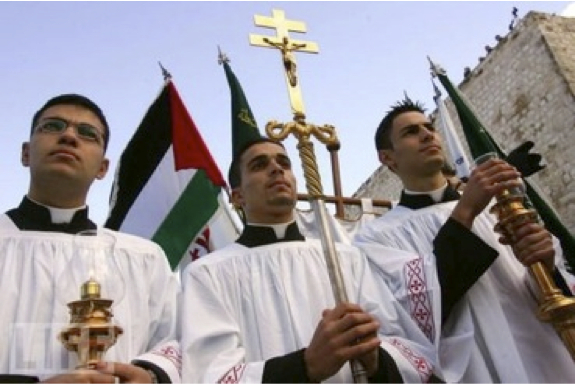 They are keenly aware of their dwindling presence in the land where Christianity began, and are appalled by the brand of Christian theology that supports Zionist claims to their ancestral home, threatens their existence, and ignores their suffering and their rights as human beings and children of God.

“We also declare that the Israeli occupation of Palestinian land is a sin against God and humanity because it deprives the Palestinians of their basic human rights, bestowed by God. It distorts the image of God in the Israeli who has become an occupier just as it distorts this image in the Palestinian living under occupation. We declare that any theology, seemingly based on the Bible or on faith or on history, that legitimizes the occupation, is far from Christian teachings, because it calls for violence and holy war in the name of God Almighty, subordinating God to temporary human interests, and distorting the divine image in the human beings living under both political and theological injustice.” 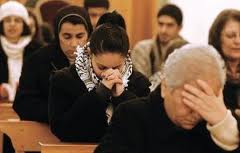 They also have repeatedly refuted the messaging, propagated the State of Israel and Zionist organizations, that would suggest they are suffering at the hands of their Muslim neighbors (sometimes identified in coded language as “Palestinian nationalism”) and that that is the cause of their high rate of emigration from Palestine – rather than the true cause, the ongoing oppression of the Israeli occupation.

Those that have remained in the Holy Land are steadfast in their faith and their hope which lies in God:

“In the absence of all hope, we cry out our cry of hope. We believe in God, good and just. We believe that God’s goodness will finally triumph over the evil of hate and of death that still persist in our land. We will see here “a new land” and “a new human being”, capable of rising up in the spirit to love each one of his or her brothers and sisters.”

The Kairos Palestine Document – A Moment of Truth: A word of faith, hope and love from the heart of Palestinian suffering.
Read and download

WCC – Faith Under Occupation: The Plight of Indigenous Christians in the Holy Land (PDF, 97 pp)
Read and download

Available at Amazon and elsewhere online. 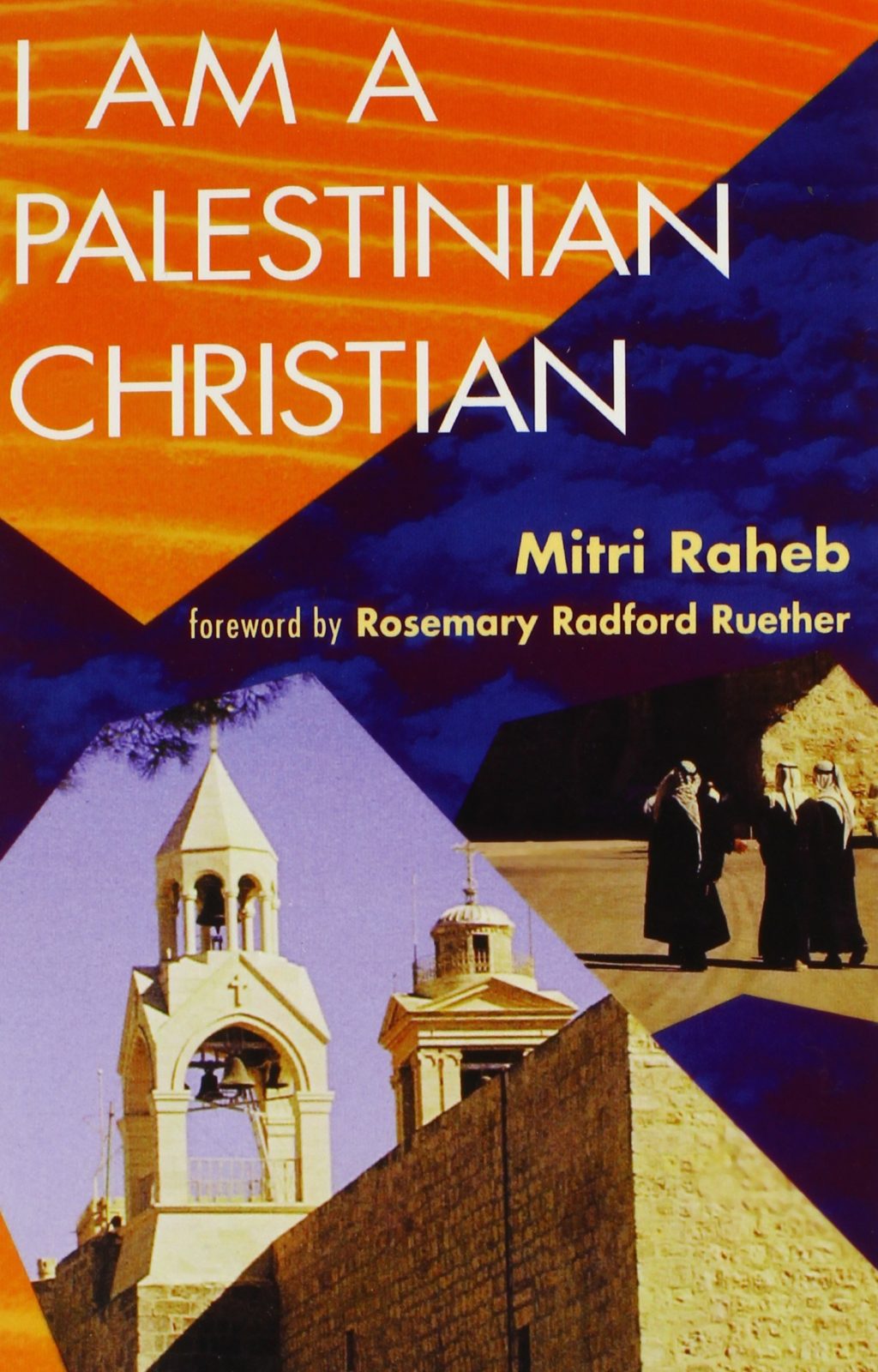 Bethlehem Besieged, by Mitri Raheb
Raheb presents a powerful collection of compelling personal stories of desperation and hope in the midst of lethal conflict, bringing the Palestinian/Israeli conflict up close and personal. Raheb’s lifelong commitment to his people has kept him in the legendary birthplace of Christianity, even as Bethlehem has become a flashpoint in the world’s most volatile and hate-filled conflict. His passionate personal testimony lifts up the stray gesture toward friendship, the brave attempts to rebuild life and livelihood in a destroyed land, and the unquenchable desire for justice and peace. 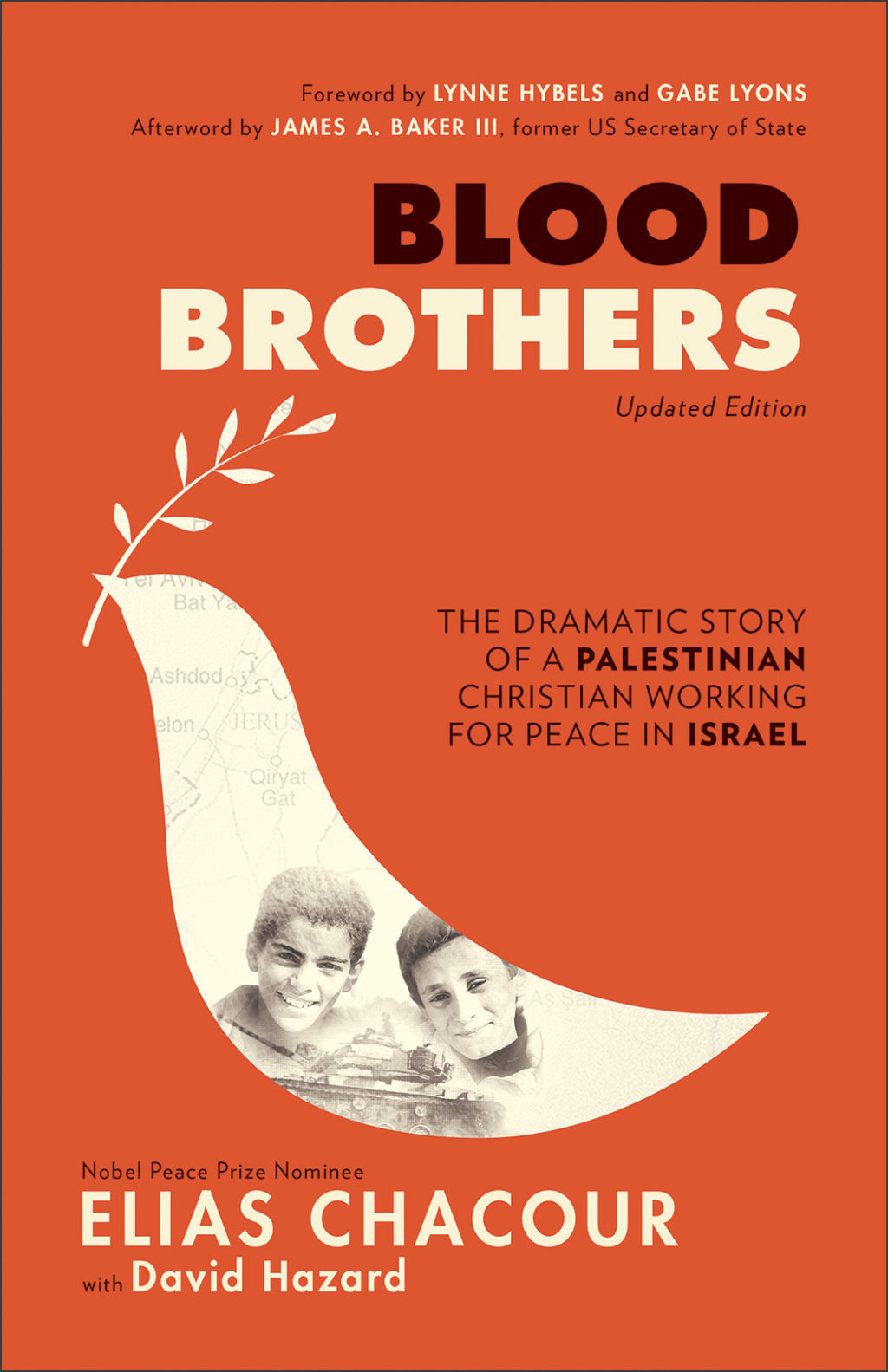 Blood Brothers by Elias Chacour, former Archbishop of Galilee of the Melkite Greek Catholic Church.
As a child, Elias Chacour lived in a small Palestinian village in Galilee. When tens of thousands of Palestinians were killed and nearly one million forced into refugee camps in 1948, Elias began a long struggle with how to respond. In Blood Brothers, he blends his riveting life story with historical research to reveal a little-known side of the Arab-Israeli conflict.

We Belong to the Land by Elias Chacour.
World-renowned Palestinian bishop, Elias Chacour, narrates the gripping story of his life spent working to achieve peace and reconciliation among Israeli Jews, Christians, and Muslims. From the destruction of his boyhood village and his work as a priest in Galilee to his efforts to build school, libraries, and summer camps for children of all religions, this peacemaker’s moving story brings hope to one of the most complex struggles of our time. 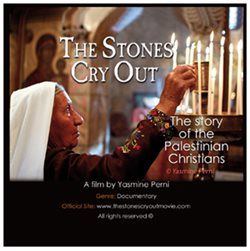 The Stones Cry Out
http://www.thestonescryoutmovie.com/
Christianity was born in Palestine two thousand years ago. From there it spread throughout the Middle East and to the rest of the world. Yet many are unaware Christians still live in the land. For more than 60 years the Palestinians, Christians and Muslims, have suffered displacement, expulsion, wars, occupation and oppression.

In 1948, tens of thousands of Palestinian villagers were driven from their homes in what was officially dubbed “Operation Broom”, intended to literally sweep tens of thousands of Palestinians from their homes in the fertile hills and valleys of the Galilee, and make way for settlers in the newly created state of Israel. Elias Chacour, now the Archbishop of the Galilee, was just a little boy when Israeli troops ordered his family out of the Christian village of Kifr Bir’am. He left the village with a blanket on his shoulder, walking to his new home, a cave. Today Kifr Bir’am is an Israeli national park, the houses of the village are crumbling, the church is abandoned.

After the Galilee came the expropriation of the West Bank in 1967, the settlements, the wall. Bethlehem, the birthplace of Christ, is now hemmed in by the wall, cut off from Jerusalem, and robbed of much of its agricultural land. All too often media coverage of the conflict in Palestine has framed it as a fight between Muslims and Jews, largely ignoring the fact that Palestine was the birthplace of Christianity, that Palestinians are both Muslims and Christians, and that Palestinian Christians have played a critical role in their land’s history and the struggle to maintain its identity.

From 1948 up to today, through wars and uprisings, leading Palestinian Christians, including the late President of Beir Zeit University Gabi Baramki, Palestinian leader Hanan Ashrawi, civil society activist Ghassan Andoni, Patriarch Emeritus Michel Sabbah and others recount the unwavering and sometimes desperate struggle of all Palestinians to resist Israel’s occupation and stay on their land.

Excerpts:
The world refers to the land of Jesus and the cradle of Christianity as “the land of peace.” The political reality today is quite the opposite. There are no words to describe the incarceration of Jesus’ birthplace, Bethlehem….

To those who choose to stand on the oppressor’s side, I ask them to remember our origins as Christians, and to resurrect the universal message of hope born in a grotto in Bethlehem 2,000 years ago.  Read more