In the aftermath of World War II, AFSC gained experience resettling refugees and displaced persons, and was asked by the United Nations to organize relief efforts for Palestinian Arab refugees in the Gaza Strip. This continued until the United Nations Relief Works Agency began operations on May 1, 1950. From its initial engagement with refugees in Gaza, AFSC has been committed to peace-building as well as relief efforts.

Today, AFSC through its Palestinian staff and partners in Gaza, the West Bank and East Jerusalem supports young people and their communities to enable them to marshal local resources that can directly meet pressing humanitarian, social and educational needs. 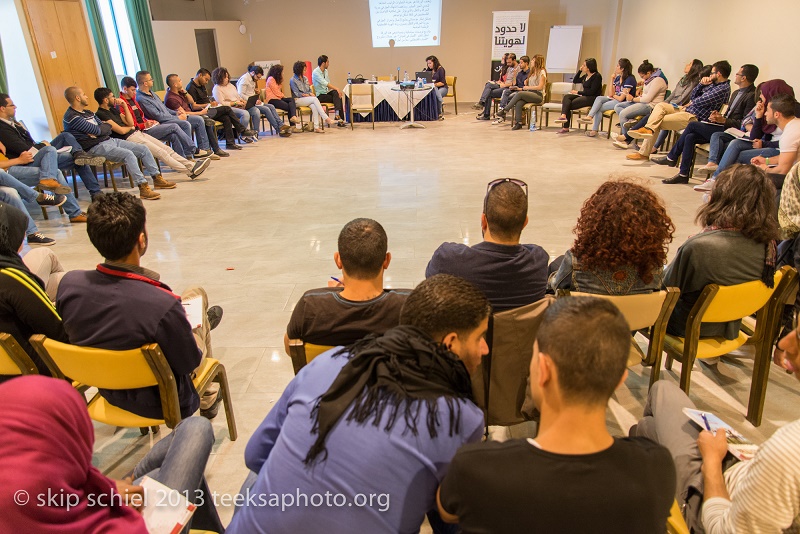 Over the past eight years the AFSC Palestine Youth Program has worked with over 4,000 young people, offering them the opportunity to use their talents and develop their skills to undertake projects that they themselves have identified in their local community. In this project AFSC works in partnership with universities, youth organizations and the Palestinian Ministries of Youth and Education and the United Nations (UNRWA).

Shortly after the end of Israel’s “Operation Cast Lead” assault on Gaza in January 2009 AFSC provided emergency humanitarian assistance to hospitals and clinics and to agencies in Gaza feeding orphaned and displaced children. AFSC works with former Youth Program participants and other partner organizations to help families to repair damaged homes using as much as possible locally available materials not subject to the continuing Israeli and Egyptian blockade of the Gaza Strip.
https://www.afsc.org/office/palestine

Quaker Involvement in the Middle East

Early history
The Quaker presence in the Middle East goes back to the 1860s, when the first Quakers from Maine, USA arrived in Lebanon and Palestine.  A community of Friends grew around the schools in Ramallah and Brummana.  Palestinians encouraged American Friends to found a girls school in Ramallah, which was built in 1869 with the support of London Yearly Meeting.  In 1901 the Friends Boys School was built.  Both schools are now co-educational; the Friends Girls School has grades Kindergarten to 6 and the Friends Boys School grades 7 to 12.

Meanwhile London Yearly Meeting supported an existing school in Brummana, Lebanon.   The school was founded by Theophilus Waldemeier, a German missionary who became a Friend as a result of contact with a travelling party of Friends led by Eli and Sybil Jones. A Monthly Meeting of Friends continues in Brummana to this day. 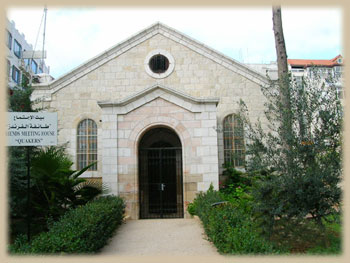 The Meetinghouse in Ramallah
A local Friends Meeting began to grow in the latter part of the nineteenth century. Following early difficulties, the meeting was revived in 1903 and a new stone Meetinghouse was built and dedicated in 1910. Ramallah Friends and Friends from the worldwide family celebrated together its centenary in 2010, committing themselves to continue to work for peace and justice and a pluralistic society. The banner inside the garden wall of the Meetinghouse, visible from the gate on the main road reads ‘Ramallah Friends Meetinghouse – A century of witness: working for justice and peace.’

The Friends’ community in Palestine has lived through the last years of the Ottoman Empire, the First World War, the British Mandate, the Second World War, the United Nations Partition Plan of 1947, the 1948 War, the Nakba, the rule of the Hashemite Kingdom of Jordan, the War of 1967, the first Intifada, the Gulf War, the Palestinian Authority, the second Intifada, the Wall and the continuing Israeli military occupation.  Despite these structures of violence and domination, Friends have always encouraged the signs of hope in the community and continue to do so.  The Meetinghouse was a place of refuge for Palestinians fleeing their homes in 1948 and 1967, and a place for many community projects over the years.
Projects and activities 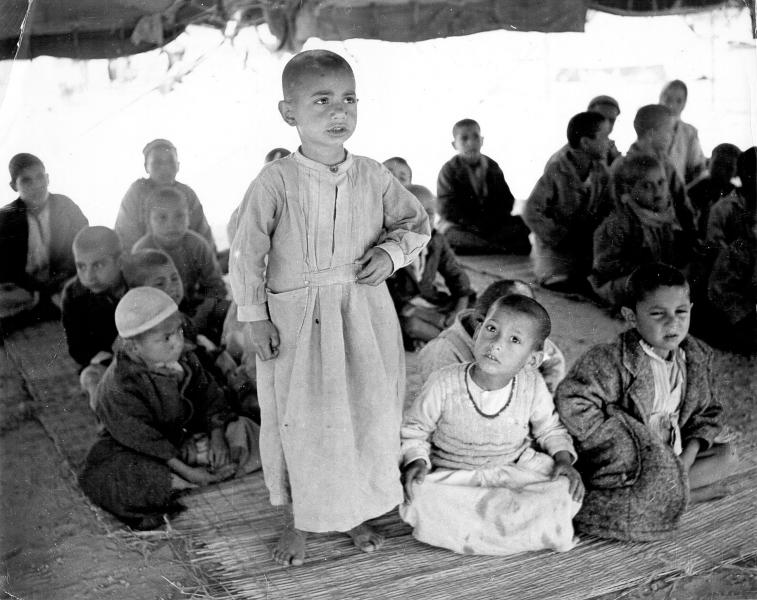 In the aftermath of the first Arab-Israeli war in 1948, the American Friends Service Committee provided services to the refugees in Gaza. The United Nations Relief and Works Agency for Palestinian Refugees took over this work in May 1950. Since then AFSC has continued to work with Palestinians and with Israelis. The programme reflects AFSC’s dual commitment to work for peace and justice and humanitarian assistance. Currently the AFSC runs a youth programme across the occupied Palestinian Territories with offices in Gaza, Ramallah and East Jerusalem. Its Middle East Regional Office is based in East Jerusalem.

The Am’ari Play Centre was established in 1974 with the financial support of Friends in Europe and the US and was housed in the Annex of the Ramallah Friends Meetinghouse.  It later moved to Am’ari Refugee Camp, on the outskirts of Ramallah.  It provides one year of pre-school education for up to 50 five-year-olds in the camp.

The Ecumenical Accompaniment Programme in Palestine and Israel (EAPPI) is an initiative of the World Council of Churches, begun in 2002, on a model developed by Quakers. QPSW is responsible for the co-ordination of the contribution to the programme in Britain and Ireland. 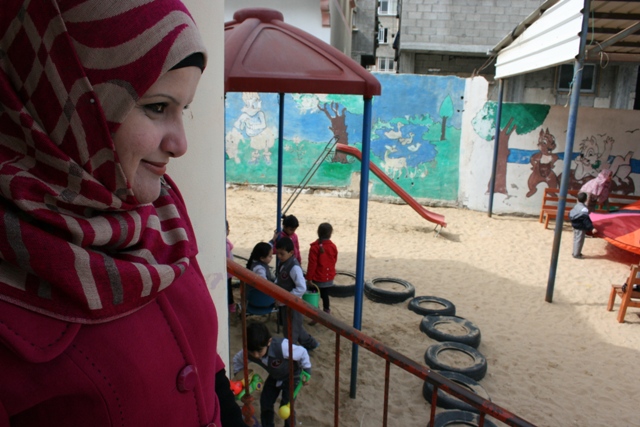 In the Gaza Strip, Quaker Service Norway (QSN) has supported 13 kindergartens since 1993. QSN pay a large percentage of the teachers’ wages through a grant from the Norwegian Development Agency, donations from Quaker organisations and other donors. The kindergartens were established by AFSC in the 1970s, and are now run by a local Palestinian NGO. The project was expanded in 2006 by providing training and counselling services for all teachers and parents of the Palestinian Early Childhood Education Programme, to help them deal professionally with the many cases of trauma they see in the children in their care.

In 2002 Ramallah Friends, in partnership with Philadelphia and Baltimore Yearly Meetings, renovated the Meetinghouse, the Annex, and grounds.  After renovations were complete, the Meetinghouse was rededicated in March 2005 and the Friends International Center in Ramallah (FICR) was established as a ministry of the Meeting.  Friends worldwide have joined in supporting the Meeting and the ministry of FICR. 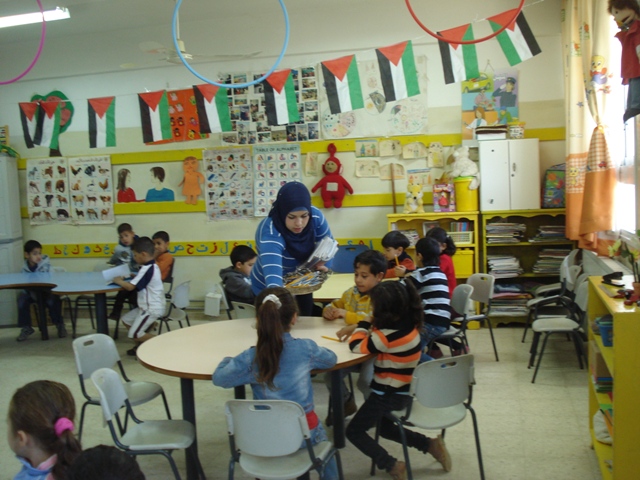 The Am’ari Play Centre in Ramallah

The Am’ari Play Centre provides pre-school education to up to 45 5-year old children who live in Al Am’ari refugee camp.
Just outside Ramallah, in the territories occupied by Israel in 1967, the refugee camp of Al Am’ari is home to some 10,520 registered refugees, people who lost their homes during the 1948/49 war which established the State of Israel, and/or where further displaced in 1967. No longer made up of tents, the camp is a collection of poorly built, high density buildings, with poor sanitation and infrastructure. The camp is run by UNRWA, the United Nations Refugees and Works Agency, which provides the room where the Centre is located, in a Girls’ elementary school. EMES has been holding this project tenderly since it was started in 1974, and runs it in partnership with Friends United Meeting and local Quakers.

1,513 families receive emergency food rations, and 252 families receive assistance under the ‘Social Safety Net’ programme. The Camp Services Officer (CSO) believes that approximately half of the men in Al Amari Camp are out of work, The average salary is between $320 and $450 an month to support a family. The cost of living in the West Bank has increased significantly in recent years; in 2008 a loaf of bread costs $1.80 and a half gallon of milk costs $3.40.

There are other Pre-schools in the West Bank. They charge between $150 and $500 a year for each child. The Am’ari Play Centre, which aims to reach marginalised communities, charges $26 a year, and waivers this cost for Special Hardship Cases.
All the children in the Play Centre are Muslim, as are their teachers – three local women, who also come from the camp, and one still lives there.

The Play Centre provides pre-school education by providing Arabic and English alphabets learning, basic mathematics, basic concepts, social interactions with other children, with teachers and with the environment and in addition to have some time to play.
Source: http://www.fwccemes.org/emes/amari-play-centre
Give to the Play Center at the above website.

More on the Ramallah Friends Meetinghouse

By the early 1990’s the Meetinghouse and Annex, which housed meeting rooms and bathroom facilities, fell into disrepair as a result of damage inflicted by time and impact of conflict. So serious was the deterioration of the meetinghouse that by the middle 1990’s it was impossible to use the building at all.

A further blow to the Friends and the wider Palestinian community was the high level of emigration brought on by the economic situation and the hardships arising from the continuing Israeli military occupation. The Meetinghouse, which had served as a place of worship for the Friends in Ramallah could no longer be used as such and the Annex could no longer be used for community outreach.

In 2002 a committee consisting of members of the Religious Society of Friends in the US and the Clerk of the Ramallah Meeting began to raise funds for the renovations of the buildings and grounds of the Meetinghouse. By November, 2004 the renovations were complete, and on March 6, 2005, exactly 95 years to the day after the dedication, the Meetinghouse and Annex were rededicated as a Quaker and community resource.