Amid the bloodshed following the partition of Palestine, Pope Pius XII mobilized worldwide Catholic aid, establishing in 1949 a temporary agency – the Pontifical Mission for Palestine – to feed, clothe and educate Palestinian refugees.

The pope entrusted CNEWA (Catholic Near East Welfare Association) with the administration of the Mission, which has become a permanent expression of the church’s concern for the well-being of all people in Palestine and throughout the Middle East. 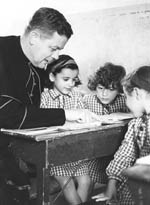 Reversing the effects of isolation and despair and restoring to fullness the respect for dignity of the human person is the goal of the Pontifical Mission’s Jerusalem office, located in the Old City. In partnership with devoted priests, religious brothers and sisters and laypeople, the Mission’s Jerusalem staff tackle issues such as poor housing, child care, needs of the handicapped, health care concerns and interreligious dialogue, which affect Palestinians and Israelis of all ages and creeds.
“Misery did not discriminate among its victims in Palestine,” noted the founding president of the Pontifical Mission, Msgr. Thomas McMahon. “Neither does the Pontifical Mission for Palestine.” 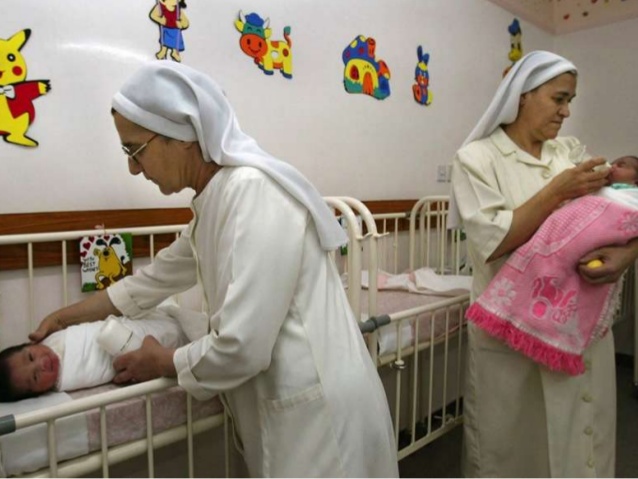 I. Overview
Immediately after the adoption on 29 November 1947 by the General Assembly of the United Nations of a plan for the partition of Palestine, renewed hostilities began between Arabs and Jews. This situation brought affliction and keen anxiety to the heart of the Holy Father, Pope Pius XII. In an encyclical letter — Auspicia quaedam of 1 May 1948 — on public prayers for world peace and the solution of the problems of Palestine, Pope Pius asked for supplications “that the situation in Palestine may at long last be settled justly and thereby concord and peace be also happily established.”

When the British high commissioner left Palestine on 14 May 1948, the State of Israel was proclaimed and Arab armies crossed into Palestine. As hostilities continued in the following months, Pope Pius grew deeply concerned. On 24 October 1948, he published another encyclical letter, In multiplicibus curis, concerning prayers for peace in Palestine. The pope expressed sorrow “that, in the land in which our Lord Jesus Christ shed His blood to bring redemption and salvation to all mankind, the blood of man continues to flow; and that beneath the skies which echoed on that fateful night with the Gospel tidings of peace, men continue to fight and to increase the distress of the unfortunate and the fear of the terrorized, while thousands of refugees, homeless and driven, wander from their fatherland in search of shelter and food.” 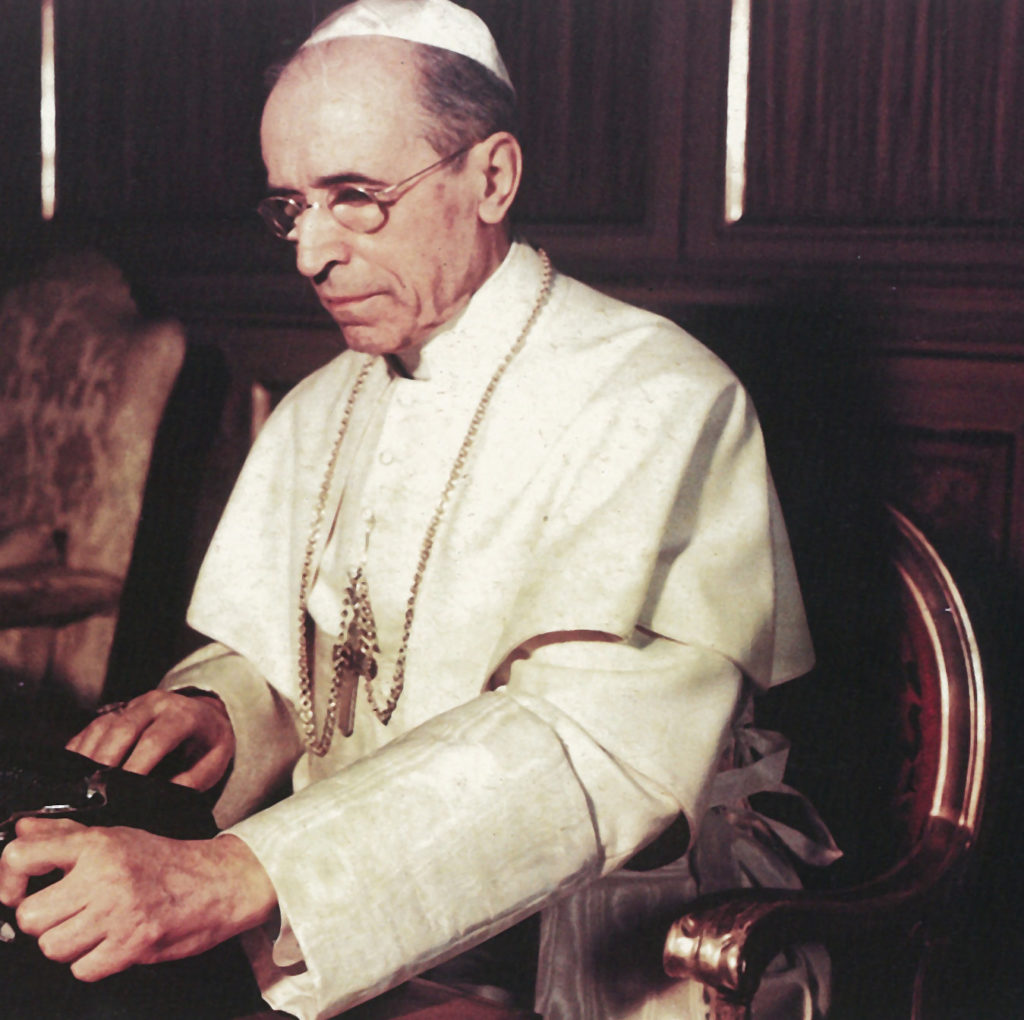 Pius XII, “without abandoning the attitude of impartiality,” did his utmost to attain justice and peace in Palestine. He sought to come to the aid of the victims of the war by sending the resources at his disposal to his representatives in Palestine, Lebanon and Egypt, and by encouraging the formation among Catholics in various countries of undertakings organized for the same purpose.

In February of 1949, when an armistice came into effect, Pope Pius continued to demonstrate his concern for the plight of the Palestinian people and the status of the Holy Places. In his encyclical letter Redemptoris nostri cruciatus of 15 April 1949, he said, “piteous appeals still reach us from numerous refugees, of every age and condition, who have been forced by the disastrous war to emigrate and even live in exile in concentration camps, the prey to destitution, contagious disease and perils of every sort.”

Establishment of the Pontifical Mission for Palestine
During the preceding months, the Holy Father had been studying the efforts of the church among the refugees with a view to unifying all the work of humanitarian and charitable assistance of the Holy See into one overall pontifical agency. In April 1949, Pope Pius summoned to Rome Monsignor Thomas J. McMahon, National Secretary of Catholic Near East Welfare Association. The pope informed him of his intention to organize a special mission for Palestine and named him its president.

On 18 June 1949, Eugene Cardinal Tisserant, Secretary of the Sacred Congregation for the Oriental Church, published an Instruction announcing that the Holy Father had erected a Pontifical Mission for Palestine and outlined its competence: “…it has been decided to bring together under the Pontifical Mission, operating in the Holy Land, all those organizations and associations which are engaged in activities concerning the East, and which are scattered throughout many countries of Europe and other continents.”

Later, Pope Pius named Canon Jules Creten, rector of the archdiocesan seminary of Malines, as secretary of the mission, and he approved the nomination of Father Raphael Kratzer, O.F.M., as assistant to the president. The field headquarters of the Pontifical Mission for Palestine was established in Beirut. Later, offices were established in Jerusalem and in Amman.

The mission began to function as the liaison of the Holy See with the agencies of the United Nations and expanded the services of Catholic personnel to the same. It also served as liaison with the other voluntary agencies working in the area.
In the years that followed, the Pontifical Mission not only distributed many tons of food, clothing, medical supplies, temporary shelters and cooking equipment to the newly dispossessed, but also constructed homes for those who had lost their own. An outstanding achievement of the Pontifical Mission was its encouragement and endowment of training and educational programs to enable the refugees to help themselves through newly acquired skills and trades and to accede to literacy and higher schooling.

Pope Paul VI’s concern
In October 1963, a few months after his election to the papacy, Paul VI, expressing his personal appreciation of and identification with the work of the Pontifical Mission for Palestine, wrote to its president that “We esteem highly the efforts and admirable achievements of that Mission, which we helped establish….” He exhorted relief agencies everywhere to collaborate with the mission, addressing in particular Catholic Relief Services, the Custody of the Holy Land and the Equestrian Order of the Holy Sepulchre.

Pope Paul VI went on pilgrimage to the Holy Land in January 1964. His vivid and personal experiences there prompted him to call for new, important and creative initiatives on behalf of Palestinians and the church in Palestine. On 25 March 1974 in the encyclical letter on the increased needs of the church in the Holy Land, Nobis in animo, the pope spoke of “the grave religious, political and social problems existing in the Holy Land: the complex and delicate problems of the coexistence of the peoples of the region, of their living in peace, and questions of a religious, civil and human nature which involve the life of the different communities that live in the Holy Land.”

Pope Paul warned that “the continuation of the state of tension in the Middle East, without conclusive steps towards peace having been taken, constitutes a serious and constant danger. This danger imperils not only the peace and security of the people there — and the peace of the whole world — but also threatens certain values which for various reasons are supremely dear to such a great part of mankind.”

New directions
In a letter to Msgr. John G. Nolan, national secretary of CNEWA and president of the Pontifical Mission for Palestine, on the occasion of the 25th anniversary of the mission, Paul VI cited its work as “one of the clearest signs of the Holy See’s concern for the welfare of the Palestinians, who are particularly dear to us because they are the people of the Holy Land, because they include followers of Christ and because they have been and still are being so tragically tried.” He expressed again “our heartfelt sharing in their sufferings and our support for their legitimate aspirations.”

Pope Paul gave new impetus and new dimensions to the work of the mission. “Our Mission for Palestine is thus about to be faced with a compelling task. In addition to continuing its assistance, without distinction of nationality or religion, to those who have suffered or are suffering in any way as a result of repeated conflicts which have devastated that region, the Mission will now have to expect, in the situation which is now evolving, to contribute to projects of aid, of rehabilitation and of development for the population of Palestine.” He again called for promotion in the Catholic world of “an effective collaboration between all the relief organizations concerned with Palestine.”

Pope John Paul II acknowledged the continuing efforts of the mission in an address on the occasion of its 50th anniversary in 1999. “In the past 50 years,” the pope said, “the Middle East has not ceased to experience moments of great tension and conflict, often exploding in acts of violence and outright war. In these circumstances, the Pontifical Mission has increased its efforts aimed at helping the local populations to rebuild their lives.

“In this way,” the Holy Father continued, “the Pontifical Mission is an eloquent expression of that ‘new culture of international solidarity and cooperation’ (Incarnationis mysterium, n. 12) which is so necessary in the modern world, and which must be a hallmark of the new millennium.

“I pray that you and all those associated with the work of the Mission will be renewed in faith and love as you seek ever better ways of helping those in need not only of material support but especially of opportunities for personal and social development,” the Pope concluded. “This is the surest path for establishing a true and lasting peace in the lives of the peoples of the Middle East.”

With its administration entrusted to CNEWA since its foundation, the Pontifical Mission for Palestine functions as CNEWA’s operating agency in the Middle East. Always, CNEWA-PMP works through the local church to meet the pressing needs of those served by the church, from the provision of emergency aid to health care, educational support and post-traumatic counseling and catechesis.

Because of its modest administrative structure, its non-governmental nature, and the confidence it enjoys among the local churches, the CNEWA-PMP acts quickly, expeditiously and effectively to alleviate human suffering and aid human development.