Click on any image to see it on a screen where you may be able to download it. You also can use Print Friendly, which will allow you to save the page as a pdf file. To do that, click the printer icon 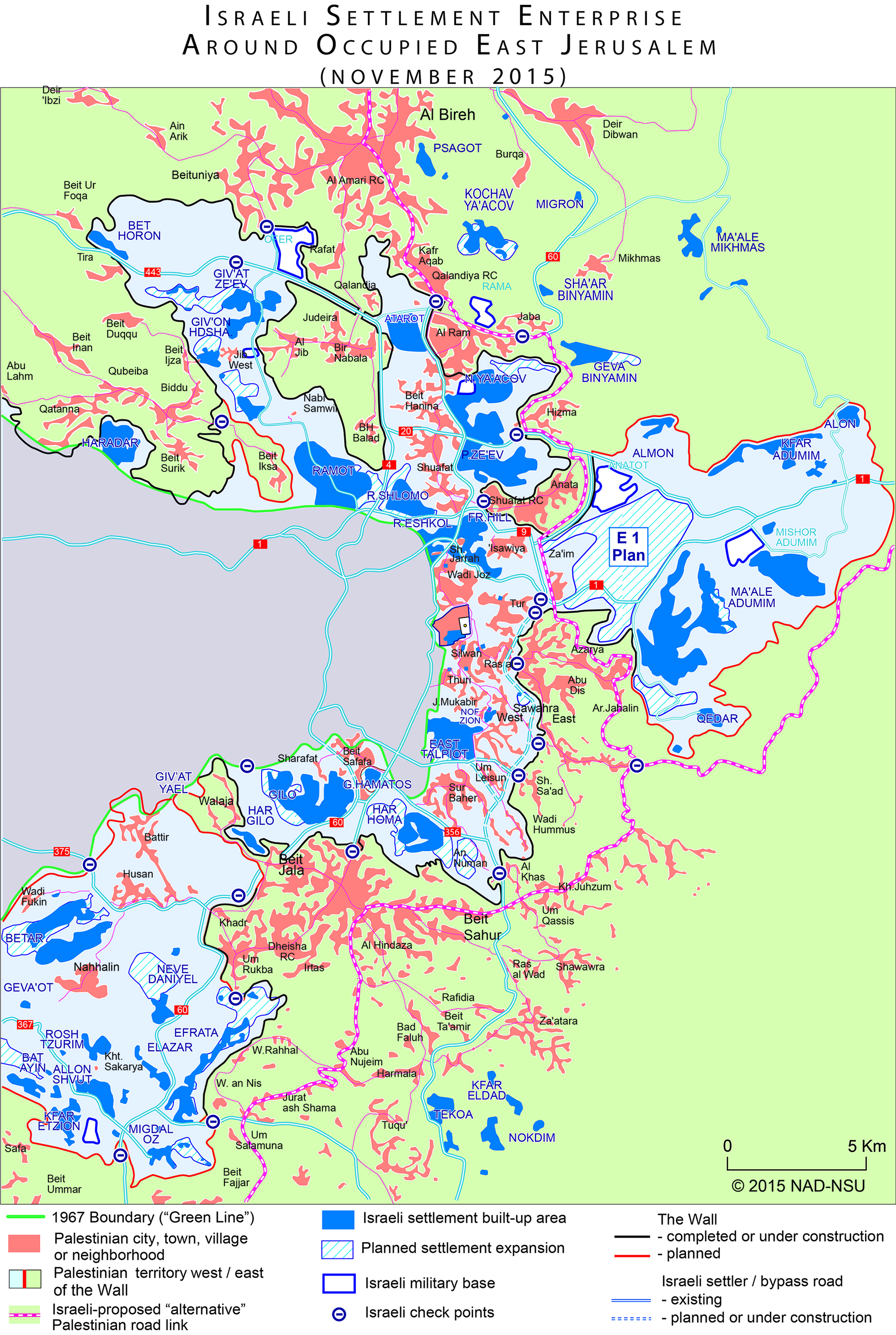 Above: In this 2015 map of Jerusalem, the green line surrounding the grey area marks the boundary of Israel proper, the internationally recognized border of Israel that was set by the 1949 Armistice. Everything else in this map is in occupied territory that was taken by Israel in 1967. Soon after that war, Israel extended the municipal boundaries of Jerusalem far beyond what they had been historically and declared all of this larger Jerusalem area to be the undivided capital of Israel, a capital that no nation has accepted and to which no embassy has moved.

This map give a detailed picture of the land around Jerusalem that Israel is annexing with the Separation Wall. The solid black line shows the portion of the Wall that has been completed and the solid red line that extends from that black line shows the route of the Wall that remains to be built. All of the light blue area is Palestinian territory trapped between the Wall to the east and the border of Israel to the west, the seam zone. All of the green area is occupied Palestinian territory beyond the Wall.

The dotted green line around that grey area is the political “Green Line,” the border of Israel as recognized by the international community. So everything else on this map is outside of Israel.

The orange border in the center shows the city of Jerusalem under the British Mandate, 1923 to 1947.

After the war of 1948-49, Israel extended West Jerusalem’s borders father west; the lighter blue line was West Jerusalem border until 1967. In that same period up to 1967, the area of East Jerusalem is in bright yellow surrounded by a red line, so it is just a little bit larger than during the British Mandate (the orange border).

After the Six Day War of 1967, when Israel gained control of all of the West Bank, it greatly extended Jerusalem’s municipal borders, out to the darker blue line. Israel then claimed that entire area for Jerusalem as its capital. Regardless of this claim, all of the land which is not inside the dotted green line does not belong to Israel; it is occupied territory that Israel has refused to relinquish. As a member of the United Nations, Israel is forbidden to grow its territory through war or aggression or to colonize territory it has taken during a war and holds under military occupation.

Left: A closer look at Jerusalem, specifically the Old City in East Jerusalem, inside the darker blue border. This area includes three sites that are sacred to three faiths –

(from left to right):

The Church of the Holy Sepulcher is built on the site where Christ is believed to have been buried after his crucifixion.

The Western Wall (also called the Wailing Wall) is a holy site of pilgrimage and prayer for Jews, believed to be a portion of the Second Temple built by King Herod.

Haram Ash-Sharif (called the Temple Mount by Jews) is the location of Al Aqsa Mosque and the Dome of the Rock, believed to house the rock upon which Abraham, at God’s command, attempted to sacrifice his son, who was Isaac according to the book of Genesis, Ishmael according to Islamic belief.