Much of the information on this page can be found in the resource “Water for Only One People” from Al-Haq, a Palestinian human rights organization and in resources from B’Tselem, an Israeli  human rights organization; those sources are included in the Resources listed on this page.  However, the source text has been adapted and supplemented, and all emphasis in bold text, italics, and underlining is added.

Contrary to popular belief, water is not, and has not been, scarce in the region, which contains three main sources of natural fresh water. As water does not follow territorial boundaries, the Jordan River, the Mountain Aquifer and the Coastal Aquifer are shared between Israelis and Palestinians.

The level of unrestricted access to water enjoyed by those residing in Israel and Israeli settlers demonstrates that resources are plentiful and that the lack of sufficient water for Palestinians is a direct result of Israel’s discriminatory policies in water management.

At present, the water sector in the occupied territory and Israel is characterized by over-exploitation of water resources, deterioration of water quality and increasing levels of demand, accompanied by decreasing supplies.

However, the burden is disproportionately borne by the Palestinian population, who do not have effective control over the development and management of water resources in the region.

Since 1967, Israel has exerted considerable military and political efforts, including the establishment of settlements, to illegally exercise sovereign rights over Palestinian water resources. A series of military orders – still in force and applicable only to Palestinians – integrated the water system of the occupied Palestinian territory into the Israeli system, while at the same time denying Palestinian control over this vital resource.

This integration was significantly advanced in 1982 by the transfer of ownership of Palestinian water infrastructure in the West Bank to Israel’s national water company Mekorot, which has forced Palestinians to rely on the company to meet their annual water needs.

The conclusion of the Oslo Accords, contrary to Palestinians’ expectations, did not result in greater access to their own water resources. Instead it formalized a discriminatory regime that was largely already in place. In reality, the water regime created by the Oslo Accords is a preservation of Israel’s exclusive control over the Mountain Aquifer [under the West Bank] and its illegal exercise of sovereign rights over the water resources in the occupied Palestinian territory.

Whereas Israelis enjoy an unlimited supply of running water all year round, Palestinians are allotted a small fixed amount, resulting in constant water shortages. Mekorot routinely reduces Palestinian supply – sometimes by as much as 50% – during the summer months, in order to meet consumption needs in the illegal Israeli settlements.

The problem is exacerbated in summer, when in order to ensure any sort of water supply, Palestinian water authorities are obliged to set communities and neighborhoods on water-rotation. Consequently, residents must deal with lengthy

intervals in which they receive no water whatsoever. In addition, the dearth of water causes a weak, slow flow through the pipes, making it difficult for the water to reach remote places and high elevations. The water shortage affects many aspects of human life – including drinking, hygiene, housework, industry, and agriculture – with severe implications for health and general welfare.

Figures regarding water usage make clear  the discrimination against Palestinians in use of water resources:

• The World Health Organization and USAID recommend 100 liters of water per person, per day. That is meant to be enough for domestic consumption and  use by hospitals, schools, businesses, and other public institutions. However, modern urban systems require greater amounts of water. According to estimates by Israeli and Palestinian water experts, the amount needed to maintain a reasonable quality of life is about 150 liters per person, per day.

• Average water consumption in the West Bank for domestic, commercial, and industrial purposes is approximately 79 liters per person/per day. In the northern West Bank average consumption is even lower: according to 2014 figures, a mere 39 liters in the Jenin area and 56 liters in the Tubas area.

• Average water consumption in Israel is much higher. According to the Israeli Water Authority, average consumption for domestic, commercial and industrial use is 287 liters per person/per day– nearly four times consumption in the West Bank.

Israel actively prevents the construction and maintenance of water infrastructure in 59% of the West Bank, earmarked Area C. This is done primarily through the denial of permits for any construction or rehabilitation of water infrastructure.  Any water structure built without a permit from the Israeli authorities – permits that are virtually impossible to obtain – risks demolition. In contrast, Israeli settlers are not required to obtain a permit from the Israeli Civil Administration and, unlike Palestinian communities, all Israeli settlements in the occupied Palestinian territory are connected to a water network. 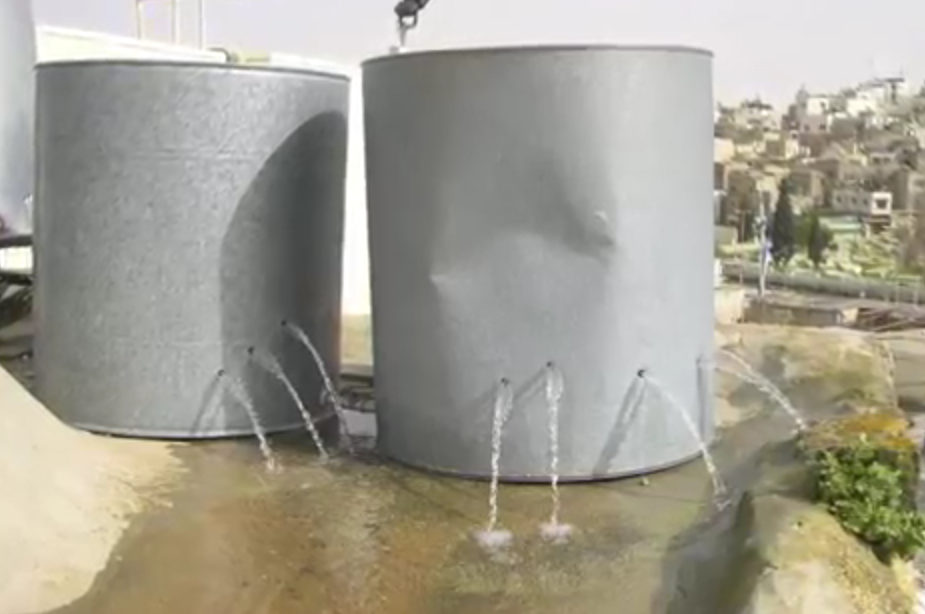 The Israeli military authorities regularly target water collection systems for confiscation and destruction, including those provided by humanitarian organizations. They do so on the pretext that such systems were constructed without an Israeli permit. In the Gaza Strip, destruction of water infrastructure frequently occurs during Israeli military operations, such
as air strikes and ground incursions.

Gaza’s primary water source is the coastal aquifer, which has been continuously over-pumped for decades, even prior to Israel’s occupation in 1967. At present, the Palestinian Water Authority pumps some 180 million cubic meters (mcm) a year from the aquifer, although its replenishment rate is only 50-60 mcm a year. Consequently, it is feared that the aquifer has passed the point of no return in terms of possible rehabilitation. The water currently pumped from the aquifer is saline and polluted, rendering 95% unfit for drinking and compelling residents to purchase treated water.

According to UN estimates, water from the coastal aquifer will no longer be fit for human consumption in 2016, and all pumping from it must therefore stop. At present [this report is from 2014], there is no operative plan for building a desalination facility in the Gaza Strip or providing any alternative water source. Another longstanding problem in the Gaza Strip is the old, faulty water infrastructure. Approximately 44% of water is consequently lost, according to Palestinian Water Authority’s figures for 2011.

Israel’s policies and practices in the occupied Palestinian territory have created a situation of occupation in which natural resources are unlawfully exploited and appropriated. Israel’s water policies represent only one element of an irreversible structural process that can only be described as colonial. Israel’s intention to

permanently change the status of the occupied territory, de facto exercising sovereignty, reveals itself through the establishment and expansion of settlements in the West Bank (currently over 200) and by the creation of a network of roads and flourishing agricultural enterprises for their benefit. The presence of settlements aims to permanently deny the Palestinian population the exercise of their right to self-determination by fragmenting the occupied territory and preventing the Palestinian people from exercising sovereignty over natural resources, in particular land and water.

EWASHPalestine – Deprived of Water in Gaza

B’Tselem – Effects of sewage from settlement on Palestinian village