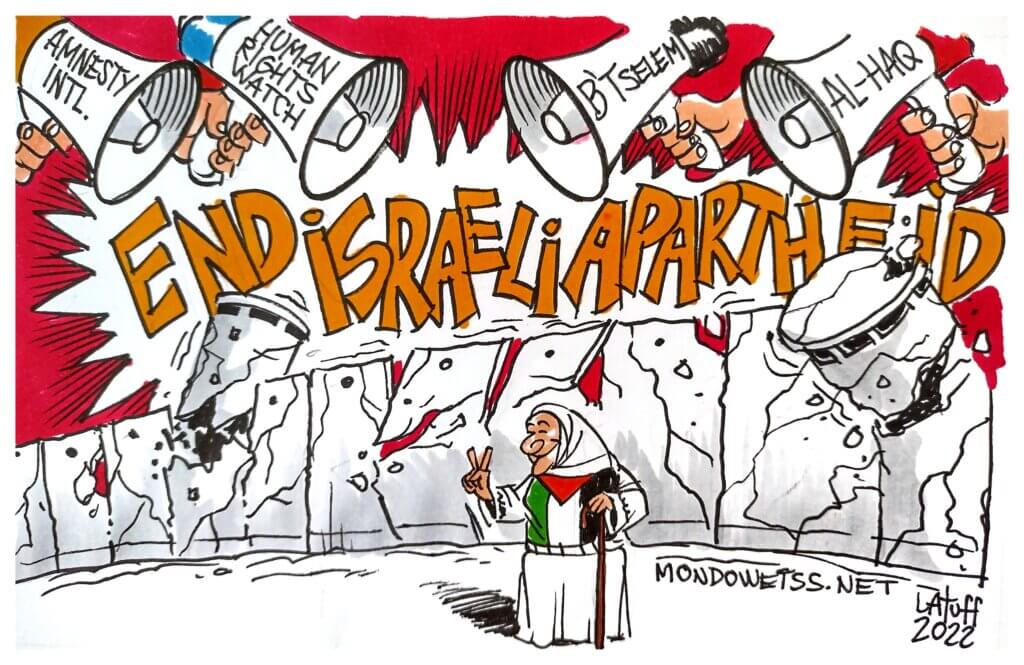 Palestinians have long maintained that the Israeli occupations is indubitably an apartheid regime and that the structure of laws and policies within Israel also displays the key features of apartheid, as it is defined under international law.

Over the last decade or more, legal scholars and human rights experts have come to see and corroborate the truth of those claims, with increasing severity and impact .

One of the earliest such instances was an in-depth 2009 study of Israeli’s administration of the occupied Palestinian territories from an international commission appointed by a South African government agency.

Since then, the mounting and impressive body of documentation and legal analysis includes:
– the 2017 report commissioned by the United Nations agency, ESCWA,
– the June 2020 legal finding from prominent Israeli attorney Michael Sfard, published by Yesh Din, an Israeli human rights organization,
– the December 2020 comprehensive report from the Palestinian Authority/PLO Negotiation Affairs Department,
– the January 2021 report from Israel’s premier human rights center, B’Tselem, a powerful indictment of their own government,
– in April 2021, another even more explosive report, extensively documented and years in the making, from world-renowned human rights organization Human Rights Watch,
– also in April 2021, from Al Haq, one of the region’s oldest human rights centers, a briefing paper that provides a helpful overview of the subject at a more digestible length,
– the February 2022 report from the world’s largest human rights organization, Amnesty International, thoroughly investigates and identifies the practice and crime of apartheid throughout Israel/Palestine, in virtually all aspects of civilian and military life.

ON THIS PAGE, find more information about each of these reports, accompanied by resources for understanding and using them for education and advocacy. 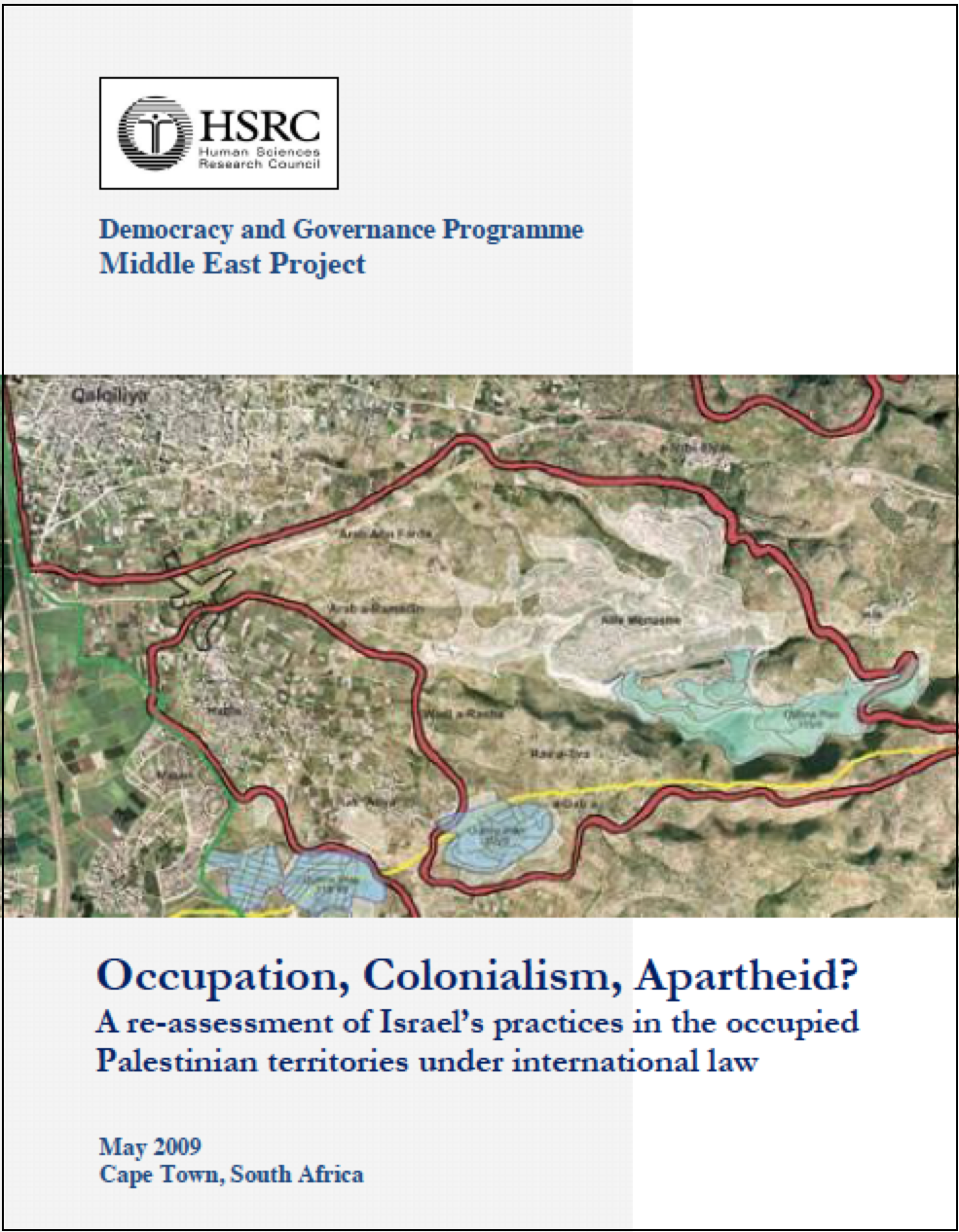 Occupation, Colonialism, Apartheid:
A re-assessment of Israel’s practices in the occupied Palestinian territories under international law

Commissioned by South African Human Sciences Research Council (HSRC)
Funded by South African Department of Foreign Affairs
May 2009 – The Government of South Africa, seeking to eliminate and prevent the kind of suffering the South African and Namibian people suffered under apartheid, commissioned a legal study of the Israel-Palestine situation. “The aim of this project was to scrutinize the situation from the nonpartisan perspective of international law, rather than engage in political discourse and rhetoric.”

An international team of legal and human rights scholars carried out this fifteen month collaborative study. They set out to examine the legal question:  Do Israel’s practices in occupied Palestinian territory, namely the West Bank, East Jerusalem and Gaza, amount to the crimes of colonialism and apartheid under international law?

The study is comprehensive and broad. It addresses pertinent international law and legal rulings, the legal status and laws governing historic Palestine from Ottoman times to the present, Israeli law and Israel’s various legal arguments as to why international law does not apply. It reviews Israel’s practices weighed against this legal context, citing similar practices carried out by the government of South Africa during apartheid. The study addresses Israel’s practices within the state of Israel proper and in occupied Palestinian territory; the conclusions about apartheid focus on Israel’s practices after 1967 in the occupied the West Bank including East Jerusalem and the Gaza Strip. 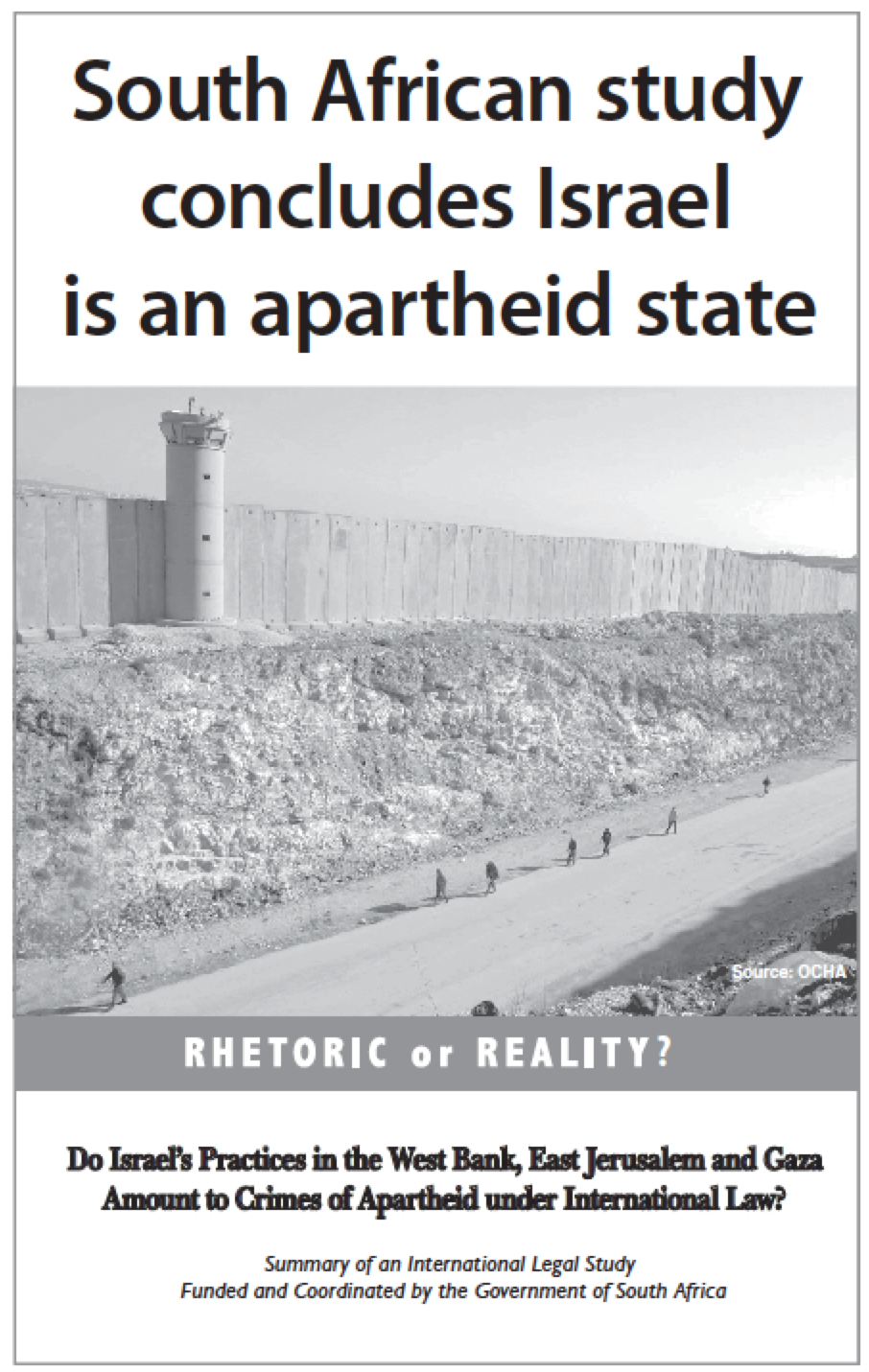 Is Israel an Apartheid State? Do Israel’s Practices in the West Bank, East Jerusalem and Gaza Amount to Crimes of Apartheid under International Law?

ICAHD-USA has provided an easy-to-read summary of this study from South Africa.
Download the ICAHD-USA summary 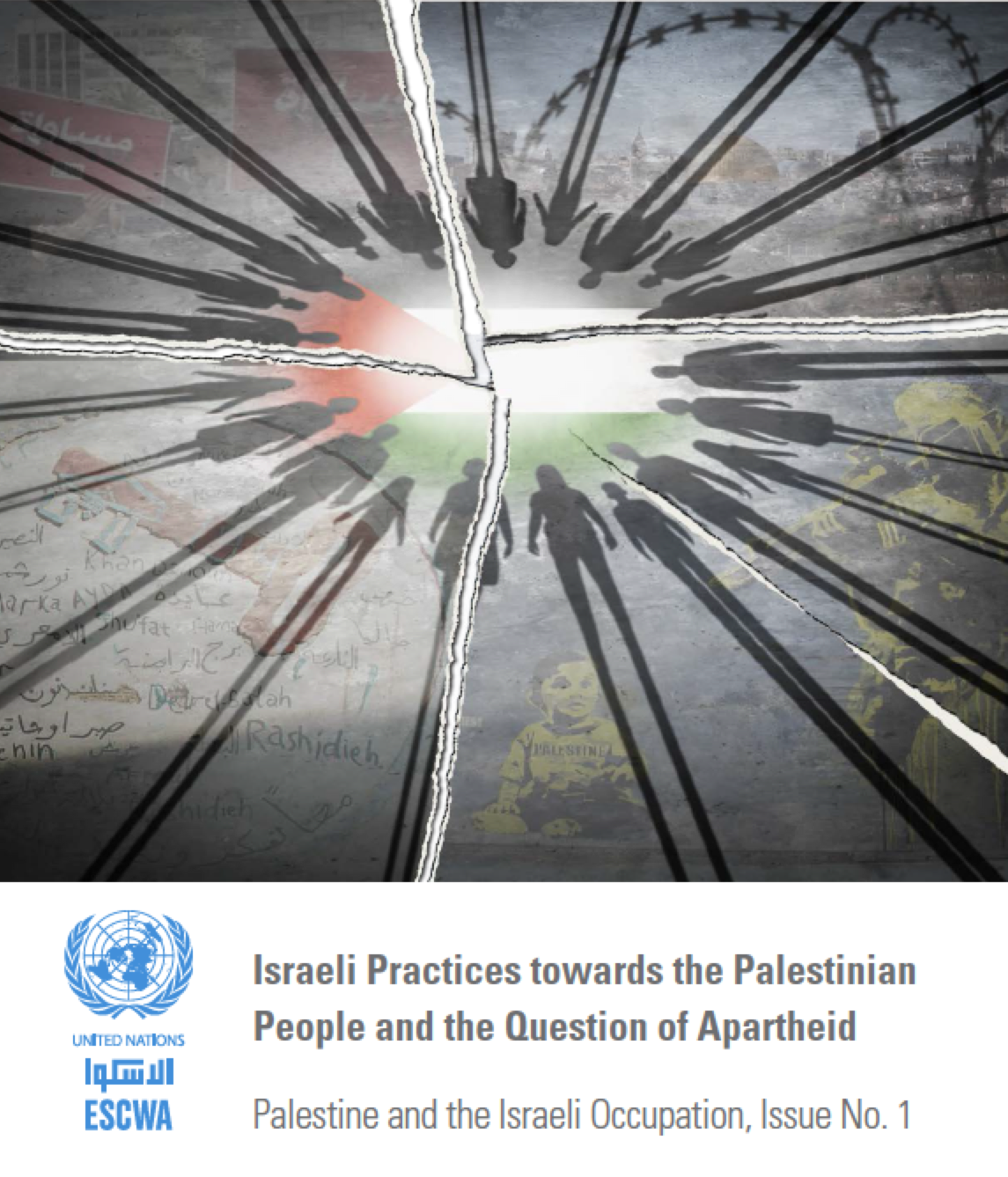 Israeli Practices towards the Palestinian People and the Question of Apartheid

Economic and Social Commission for Western Asia (ESCWA), United Nations
March 2017 – A report commissioned by the UN agency ESCWA concludes unequivocally that Israel practices apartheid.
“This report concludes that Israel has established an apartheid regime that dominates the Palestinian people as a whole. Aware of the seriousness of this allegation, the authors of the report conclude that available evidence establishes beyond a reasonable doubt that Israel is guilty of policies and practices that constitute the crime of apartheid as legally defined in instruments of international law.
Download the Executive Summary of the ESCWA report (6 pages)
Download the full report (74 pages)
See the article in The Nation: “The Inside Story on Our Report Calling Israel and Apartheid State” by Richard Falk

Yesh Din
June 2020 – Yesh Din, a human rights monitor in Israel, initiated the wave of reports on Israeli apartheid in the 2020s. They released a detailed legal opinion primarily authored by Michael Sfard, a prominent Israeli attorney and specialist in international law.

Their paper argues that Israel’s 53-year occupation of the West Bank constitutes an “apartheid regime.” In Sfards words: “Up until now, Yesh Din would say that specific policies are illegal or are even war crimes, but now we are talking about the regime being illegitimate.” [The goal of the legal opinion] “is to change the internal Israeli discourse, and no longer talk about our presence in the West Bank as an occupation that is temporary, but as an illegitimate crime.”
See the full legal opinion and associated resources at the Yesh Din website
Download the full document (58 pages)
Download the summary (10 pages)
Download the FAQs (5 pages)
See the article in +972 Magazine: ‘An illegitimate regime’: How a top rights group shed Israeli myths to recognize apartheid 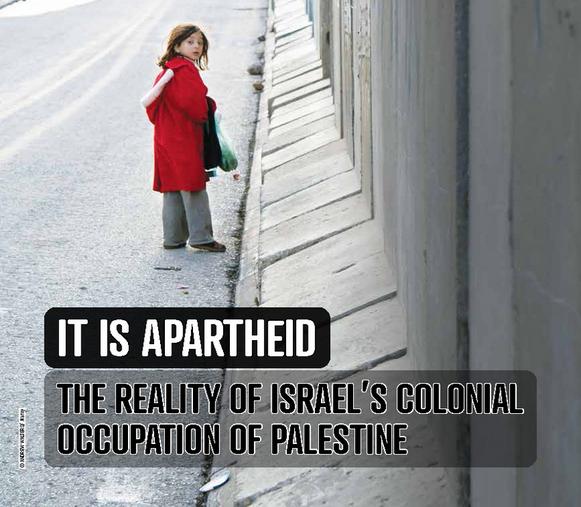 It Is Apartheid: The Reality of Israel’s Colonial Occupation of Palestine

State of Palestine/PLO Negotiation Affairs Department
December 2020 – The State of Palestine/PLO Negotiations Affairs Department has published a comprehensive report on Israeli apartheid that had been planned by Dr. Saeb Erakat, Secretary General of the PLO’s Executive Committee among other positions of leadership he held, shortly after his death from Covid-19 at the end of 2020. From the Foreword: “This publication presents a full explanation of Israel as an apartheid system. It defines continuing acts of apartheid by the State of Israel in the land of Palestine occupied since 1967 and how it maintains systematic racial oppression and domination over the Palestinian people as a whole to ensure that their continued fragmentation into separated groups prevents their collective right of self-determination and to consolidate its illegal settler-colonial enterprise. It highlights that the apartheid system is characterized by a series of racist Israeli laws implemented since 1948 and continued by the Israeli occupying forces in 1967 and further defines penalties under international law and human rights law provisions.”
Download this report

The Legal Architecture of Apartheid

Al Haq
April 2021 – In the same month as the Human Rights Watch report (see below), Al Haq, one of the oldest human rights centers in the Middle East, published a briefing paper on Israeli apartheid, a helpful overview on the subject at a more digestible length.

From the conclusion: “Israel maintains its apartheid regime through a complex framework of laws that enable demographic engineering, widespread land appropriation and the fragmentation of the Palestinian people and territory. These laws also introduce illegally transferred Jewish settlers to colonize both sides of the Green Line. Finally, racially discriminatory laws seek to subordinate the Palestinian population as a whole through denying their collective rights of return, self-determination and permanent sovereignty (over lands on both sides of the Green Line).
See it on their website
Download the paper

A regime of Jewish supremacy from the Jordan River to the Mediterranean Sea: THIS IS APARTHEID

B’Tselem
January 2021 – B’Tselem is a human rights center in Israel that monitors what is happening to Palestinians in the occupied territories; their name means “image” in Hebrew, from the phrase “b’tselem elohim” – in the image of God . Often invited to present at the United Nations, the center has a sterling reputation globally for its sound research and documentation and for its carefully considered conclusions. This paper published in early 2021 was a virtual bombshell in its effect, given the severity of this center’s indictment of the government of their own country.
See the report at B’Tselem’s website
Download the report (8 pages)
Check out their “Illustrated Explainer” online, which shows step by step how Israel has created an apartheid regime over Palestinians. 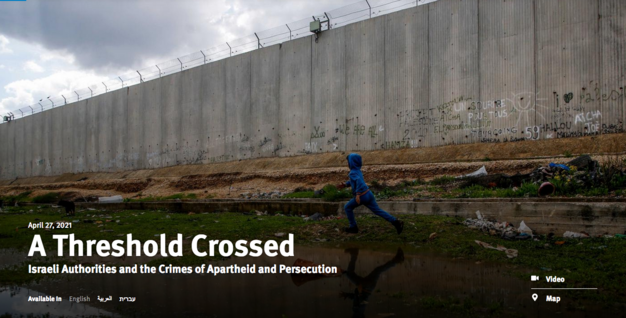 A Threshold Crossed: Israeli Authorities and the Crimes of Apartheid and Persecution

Human Rights Watch
April 2021 – In this rigorously documented report, the esteemed international rights monitor Human Rights Watch declares that Israeli authorities are committing the crimes against humanity of apartheid and persecution. That finding is based on an overarching Israeli government policy to maintain the domination by Jewish Israelis over Palestinians and grave abuses committed against Palestinians living in the occupied territory, including East Jerusalem.

The 213-page report presents the present-day reality of a single authority, the Israeli government, ruling primarily over the area between the Jordan River and Mediterranean Sea, populated by two groups of roughly equal size, and methodologically privileging Jewish Israelis while repressing Palestinians, most severely in the occupied territory.
Read the summary and full report at their website
Download the Summary(17 pages)
Download the full report (224 pages) 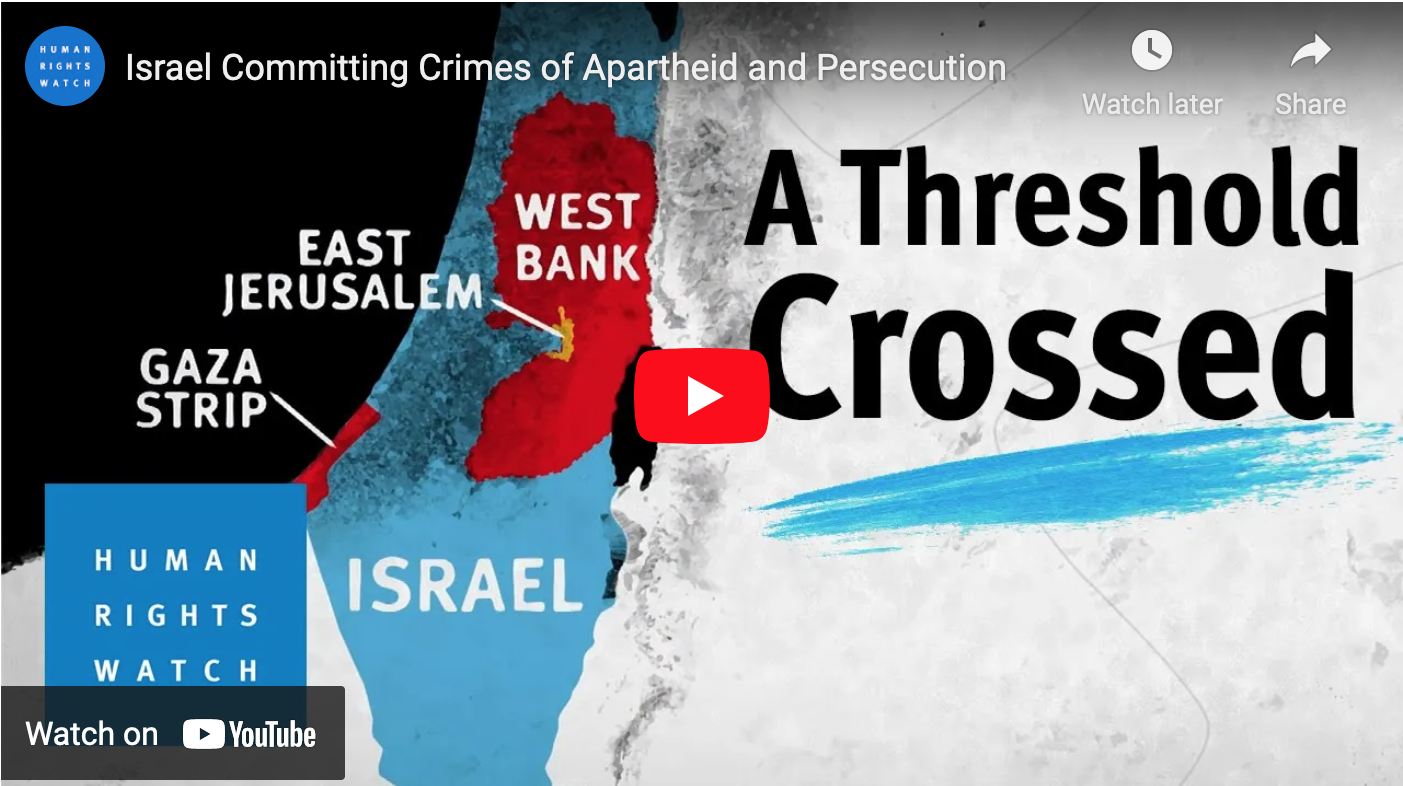 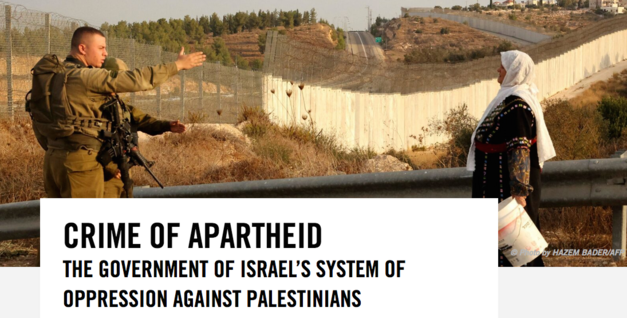 ISRAEL’S APARTHEID AGAINST PALESTINIANS:
Cruel System of Domination and Crime Against Humanity

Amnesty International
February 2022 – Coming from the largest human rights organization in the world, the report from the venerated Amnesty International has garnered even more praise and resistance than its predecessors, as it is more damning in its conclusions than previous indictments of the Israeli regime.

Amnesty International has assessed that almost all of Israel’s civilian administration and military institutions are involved in the enforcement of a system of apartheid against Palestinians across Israel and the Occupied Palestinian Territories (OPT), as well as Palestinian refugees and their descendants outside the territory. “Laws, policies and practices which are intended to maintain a cruel system of control over Palestinians have left them fragmented geographically and politically, frequently impoverished, and in a constant state of fear and insecurity.”

Amnesty has prepared excellent resources to accompany with this report, and they have two good websites to visit:
See AmnestyUSA.org to learn about Israeli apartheid and download the report and many resources: https://www.amnestyusa.org/endapartheid/
Amnesty.org has a campaign page introducing the subject and providing opportunity for action:  https://www.amnesty.org/en/latest/campaigns/2022/02/israels-system-of-apartheid/

Amnesty has prepared an online course, a free 90-minute educational resource: “Deconstructing Israeli Apartheid Against Palestinians”
By the end of the course, you will be able to…
• Define the characteristics of the human rights violation and crime of apartheid in international law
• Explain how the oppression and domination of Palestinians by Israel amounts to apartheid
• Describe how apartheid affects Palestinians
• Take action to campaign against apartheid
Certification: Certificate of Participation
See the 90-minute course here

Click the image below to see the 15-minute video Amnesty has prepared to explain and illustrate Israeli apartheid and how it came to exist in the Holy Land. 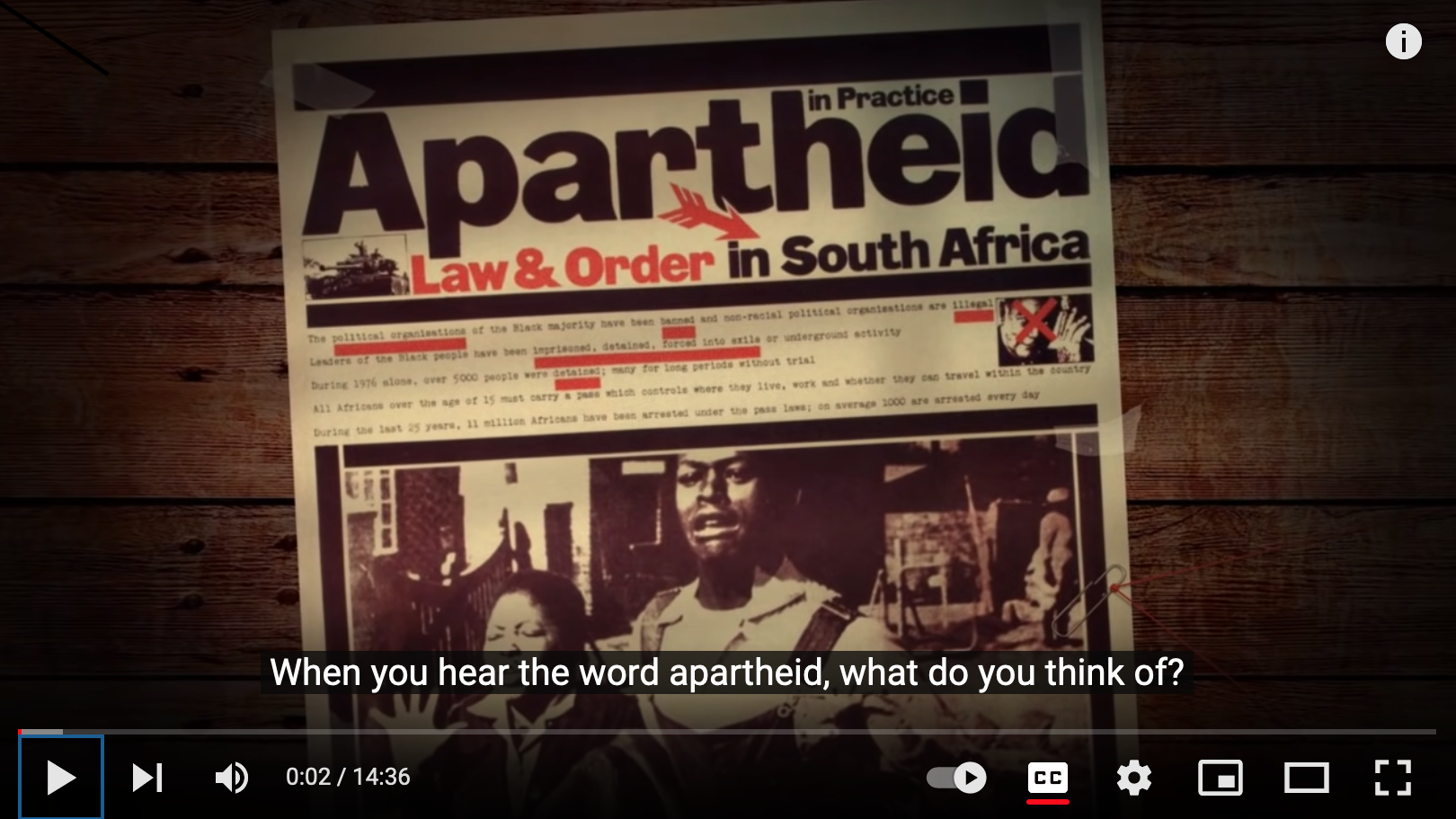